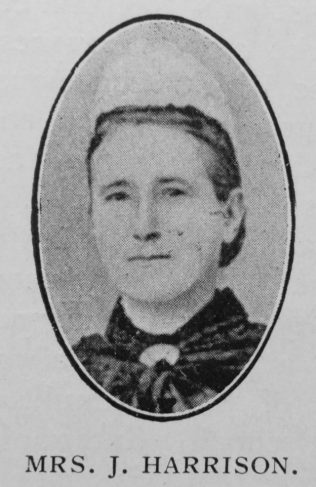 The late Mrs. Harrison was born at Kirby-Moorside, Yorkshire, February 6th, 1833. Her parents were members with the Wesleyans, her grandfather, Rev. T. Haigh, being one of J. Wesley’s coadjutors. Left fatherless at eleven years of age, she prayed, “Oh, God, Thou hast taken my father, be Thou my Father now.” Shortly after this she was led to Christ at a service in the Primitive Methodist Chapel, where she became a member.

From the first she paid her member’s dues, refusing to allow her widowed mother to find the money for class pence, collections, or seat rent. As a child, too, she became a soul-winner. In 1863 she became the wife of the Rev. John Harrison, and was an active partner in his ministry for forty-eight years. For fifty years she was a class-leader, and for forty-three years a local preacher. As an evangelist she was most successful, winning hundreds of souls to Christ. She never failed to reach the hearts of her hearers, and at the same time captured the understanding of the best informed among them.

Nor did her public work interfere with her duties as wife and mother. Indeed, but for the claims of home, which were sacred to her, and in which none could take her, place, her public ministry might have been more extensive and more widely known. Her one remaining child is Rev. J.J. Harrison, of, Haworth.

In the spring of 1910 our venerable friend came to reside at Haxby, on York 1st Station. On May 8th Mrs. Harrison received her call to the “Homeland” in the 78th year of her age. A large number of friends gathered for the funeral service in Monkgate Church and the interment in York Cemetery on May 11th, the officiating ministers being the Rev. J. Reavley and Rev. W. Franks.

Before her marriage Christiana worked as a general servant (1861).

She married John Harrison (1836-1934), a PM minister, in the summer of 1863 in the Scarborough Registration District, Yorkshire. Census returns identify four of six children.

Christiana died on 8 May 1911 at Haxby, Yorkshire.