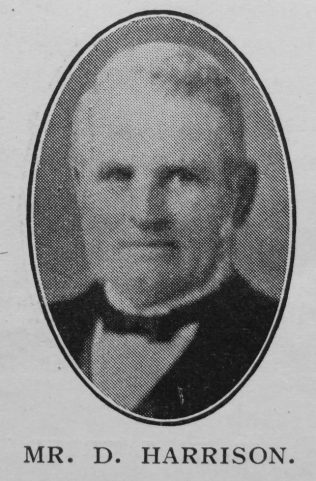 Transcription of obituary published in the Primitive Methodist Magazine by W.T.H.

Suddenly, without warning, Bro. Daniel Harrison passed from us. Preaching on the Sunday with accustomed vigour, early on Tuesday, June 14th, he went to be with God at the age of 67. A native of Woodfalls, when a youth he made the “great choice,” joined the Church, and remained in membership till his death. In his teens he commenced to preach, and served his circuit and connexion with marked success.

He excelled as a preacher. Clear and positive, he spake what he knew. In the early part of his life, he knew what it meant to suffer persecutions for Christ’s sake. An intensely loyal brother, his place was never vacant unless he was planned out. As an official he took an intelligent interest in the business of his circuit.

A man of principle, in prayer he was mighty, in the Scriptures well-read. At the largely attended funeral Revs. J.H. Green, T.C. Rigg, and W.T. Healey took part.

Daniel was born abt1843 at Woodfalls, Wiltshire, to parents Stephen, a shoemaker, and Elizabeth.

Daniel worked as a blacksmith.

He married Martha Prior (abt1848-1933) in early 1869 in the Winchester Registration District, Hampshire. Census returns identify five children.