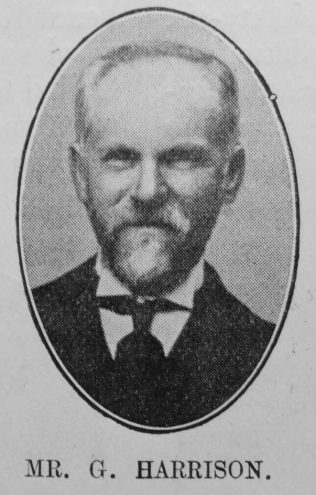 Transcription of Obituary published in the Primitive Methodist Magazine by W.A.B.

George Harrison was born in Raunds, Northamptonshire, in 1843. Employed in a boot factory, he was always a reliable workman. When he was about nineteen years old he was converted, and joined our Society in the village. From that time to the day of his death he was a regular and consistent Christian. He opened his house for religious services, and when the chapel was erected there was never a more devout member, nor a more trusted official than he.

During his life he held many offices with credit to himself and to his church, and at the time of his decease he was class leader and trustee. One of the first members of our Church here, he was ever loyal. He observed our rules both as a member and official, and was one of the oldest trustees.

His character was unimpeachable, he was jealous for the purity of its members. A faithful believer in the old-fashioned class meetings, his experience, if brief, was always fresh and fervent, and his influence will not be lost on the present generation. He was mighty in prayer, and his religious life was an intense reality. His attendance at the means of grace could always be relied on.

His last illness was a painful one, but he was patient and resigned and never a murmur escaped his lips. He was a good man, full of the Holy Ghost, and a true friend to all. He leaves a widow and six children to mourn his loss, but he left them the heritage of a godly life, and now has gone to join the great host above. He passed to the higher life in his sixty-sixth year, on July 1st, 1909, after forty-six years of faithful service to his day and generation.

The funeral service was conducted in the Wesleyan Church, and on the following Sunday a memorial service was held in our own chapel, and a finely conceived address given by his old friend, Rev. W. Durance. Thus finishes the earthly life of one whom it was a pleasure to know of one who though dead still lives, and whose memory will remain for many days as precious ointment poured forth.

George was born in 1843 at Raunds, Northamptonshire, to parents John, a cordwainer (1851), and Elizabeth.

George worked as a shoemaker.