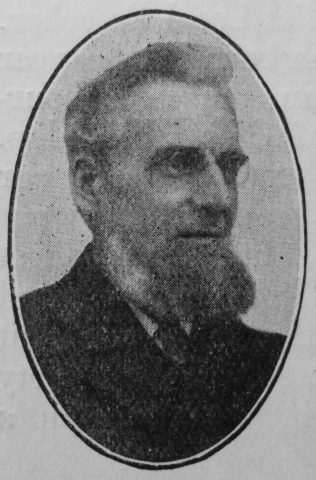 Mr. Greenwood Hartley was born in Keighley in 1840. His parents were John and Betty Hartley. The only early educational advantage he had was that which the Sunday School of that time afforded, but his keen intellect and studious habits enabled him in later days to more than make up for the scholastic deficiencies of his early education. His tendency to religion was inherited from his mother, who was very good, and his association with the Queen Street Primitive Methodist Sunday School, Keighley, was continued until he had passed from scholar to teacher, then to preacher, class-leader, and trustee.

He left Keighley in 1885 for Nelson, where the remainder of his life was spent. He was a teacher in the School to the end, and filled many other offices with great distinction. He had a fine spirit of chivalry, a most winning manner, a generous disposition, and he was the confidante of many friends. As a public speaker—and he was a preacher for forty-eight years—he was always thoughtful and expressed himself in graceful language.

He had passed his jubilee of membership when he was called to “where, beyond these voices, there is peace;” yet for us the call came much too soon. His brethren delighted to honour him, but true to his nature his modesty shrank from their honours whenever possible. Twice, however, he was appointed to attend the District Meeting, and once to Conference, (Bradford in 1889). He has left a widow, in Nelson, and a son, Mr. A. D. Hartley, in Keighley.

The mortal remains of our dear brother were laid to rest at Keighley, on March 12th, 1907, after a service in the Scotland Road Church, Nelson, the Revs. J.W. Chappell, J. Dodd, and W. Fidoe, officiating. A memorial sermon was preached at Nelson on the following Sunday by Rev. J.W. Chappell, and a large memorial portrait was placed in the schoolroom. But we miss the kindly genial presence still, with the sympathetic word and loving deed.

Greenwood was born in 1840 at Keighley, Yorkshire, to parents John, a warp dresser, and Betty.

Greenwood followed his father as a warp dresser.