From Pit to Parliament 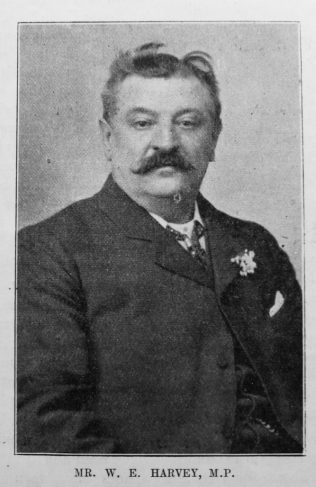 Transcription an Interview in the Primitive Methodist Magazine by Rev. Samuel Horton

It was the morning after the North-East Derbyshire Election that I found myself in Chesterfield – the town of the crooked spire – with the “Daily News” in one pocket and the “Sheffield Daily Telegraph” in the other, each telling in its own characteristic way the story of Mr. Harvey’s victory. With a majority of 725 behind him Mr. Harvey goes to St. Stephen’s – to join the group of Liberal Labour men – who are making the pace for the Government.

During the greater part of the campaign, Mr. Harvey had been confined to the house with an inopportune attack of bronchitis – and his absence from the conflict, according to one Conservative, counted a thousand votes, and this was itself sufficient to explain the reduced majority. For, Mr. Harvey is a splendid fighter. He possesses a magnetic personality, and is a rousing speaker. With thirty-four years of training as a local preacher behind him, he is able to interest and hold an audience with all the ease of the practised orator.

Though still under medical treatment he received me very kindly, and readily answered my questions. I found him with an immense pile of letters and telegrams of congratulation before him, one of the former of which he was engaged in answering when I entered. It stated how the writer, a poor working man, had lost a day’s work and walked fourteen miles to vote, and expressed the joy of the writer at his success. “I felt,” said Mr. Harvey, “I must answer that letter anyhow.”

“Yes,” he said in answer to my question. “I have been a Primitive Methodist all my life. My mother carried me in her arms to the Class Meeting. My present medical adviser, Dr. George Booth, was my Sunday School teacher, and he is proud of my victory as I am proud of his friendship. I came on the plan when I was twenty. I was a class leader for ten years at Hasland and twelve years at Chesterfield, and I am now Circuit Steward of the second Circuit in this town. I have been elected four times as a delegate to the Conference, but have only been fortunate enough to be able to attend once. It is interesting to remember now that at that Conference I moved a resolution in favour of Free Education, and it shows how far we have progressed since those days that such Connexional stalwarts as Dr. Samuel Antliff and the Rev. John Wenn were the strongest opponents to it. I have been, and am still greatly interested in all Connexional Movements.”

“I had but few early advantages,” continued Mr. Harvey. “My father died while I was a boy and at ten years of age I commenced work at Grassington Colliery. The hours were from six till six, and the remuneration tenpence per day. In the winter I never saw daylight except on Sunday. Thosewere the days before Trades’ Unions had insisted that the toiler had rights as well as duties. I have gone through the mill and I know what the tyranny of capital was.”

Our conversation then turned to more general topics, and I requested Mr. Harvey to give me his views on the education controversy.

“I cannot say what the next Bill of the Government may be,” he said, “but this is certain, it must be more satisfactory to Nonconformists than the last. Mr. Birrell conceded too much. I for one can never consent to offering the same conditions again. The bishops missed their opportunity in not at once accepting the Bill. I am one of the many who have been converted by their action to the conclusion that there is, and can be, no satisfactory solution of the problem but secular education. I am sorry it is so, but the choice is between that and clerical domination of the schools, and I cannot hesitate as to the side I shall take.”

“That means,” said Mr. Harvey impressively, “that we must as churches revise our methods. The best brain of the churches must in future go into the Sunday Schools. It is the most fertile field of Christian service. In my judgment the position of the Sabbath School teacher is more important than that of the local preacher, and more than once recently I have considered whether I should not resign the one that I may take up the other.”

“Another question that will be immediately before the House I presume will be Licensing Reform,” I said. “What, in your opinion, ought the Government to do in the matter?”

“Give the people the control of the Drink Traffic,” was the immediate answer. “I am in favour of Sunday Closing and of Local Veto. I think also that clubs should be placed exactly under the same restrictions as the public houses. This I regard as very important. I do not believe in the municipilisation of the Trade. In my judgment it would be to perpetuate the present evils under a new guise, and create other evils which do not at present exist.”

“And what about the House of Lords?” I asked.

“Oh!” said he with a laugh, “my opinion on the House of Lords is well known. An hereditary chamber is an anachronism in this democratic age. It is a survival of feudalism and must go. I do not say a second chamber is unnecessary. But it must be an elective chamber, and in touch with modern ideas. The bishops, of course, must be excluded. There is no justification either in history or in reason for their remaining.”

“As one in constant touch with working men, is there any truth in the assertion so frequently made by the ‘Clarion’ and other publications that the working men are getting more and more hostile to organised Christianity?” I asked.

“Not so far as Derbyshire is concerned,” he answered most emphatically. “And so far as my knowledge goes it is not generally true. I think rather that the Churches are strengthening their hold on the toilers, at least, I am sure this is true so far as the villages go.”

“There are many wrongs that need righting. For example, the sweating of the match makers, the long hours that have to be worked in order to get a livelihood in certain industries, the iniquities of our Land Laws, and, what I am specially interested in, the abolition of Mining Royalties. And if it be true that righteousness exalteth a nation, then the Church cannot fail to include these in her programme. Christianity to my mind is enthroned righteousness. Let the ministers go for that and the workers will follow. I tell you the most popular men to-day among the miners are men who are not ashamed to put their religion in the front. There may be indifference among a great many of the workers to religion but I am pursuaded there is not antagonism.”

Mr. Harvey deeply impressed me with his sincerity. He is a wide awake business man on the one side and a spiritual leader on the other. Primitive Methodism may well be proud of this pit-laddie who has fought his way to a seat in the legislative chamber of a great nation.

William was baptised on 11 October 1852 at Hasland, Derbyshire. His parents were James, a labourer, and Elizabeth.

His biography on Wikipedia records he was a founding member of the Derbyshire Miners’ Association in 1880. He was elected to Chesterfield Borough Council in 1897.

He married Harriet Hollingworth (abt1843-1913) on 26 November 1871 at Chesterfield, Derbyshire. Census returns identify one of two children.