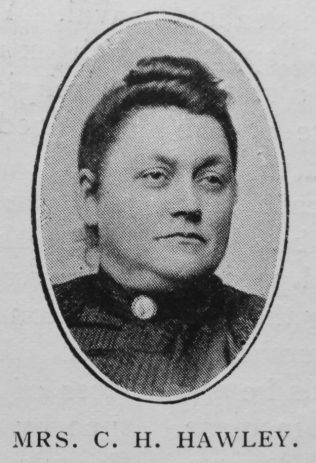 Transcription of obituary published in the Primitive Methodist Magazine by J.H.J.

The Church at Seacombe, in the Birkenhead First Station, has just sustained a distinct loss through the death of Mrs. C.H. Hawley. Early in the new year she was translated to the Father’s home. Born in New York State she was of Scotch ancestry, and came to England to reside in Egremont the year after her marriage.

She was a member of the Church along with her husband and four members of her family. There are four daughters and two sons, and all are followers of Jesus Christ. Her home on earth was a home of love. The devotion of each to the other was quite a distinctive feature, and the mother was the confidant of them all. She was a good woman with a genial, kindly disposition and large heart. She delighted in the worship of God, and she was nearly always to be found, together with her husband and family, at the Sunday morning service.  She believed in prayer and a prayer-answering God. She had a simple, workable faith.

The Tuesday night before her departure she gave a word of counsel to each member of the family, and thought also of loved ones far away beyond the seas. She spoke of how she loved the Church with all its ministries, and certainly in her life time she was most devoted. She took a conspicuous part, from its inception, in the Pleasant Monday Afternoon Meeting for women. The funeral service was conducted by Rev. J.H. Johnson and Mr. Alderman B. Swanwick in the church on January 10th, she having passed away on the 6th. On the Sunday evening a memorial service was held. The church was full, and every token of respect was shown to the memory of one who lived a very beautiful life on earth in preparation for the higher life of heaven.

Josephine was born abt1856 in New York State, USA.