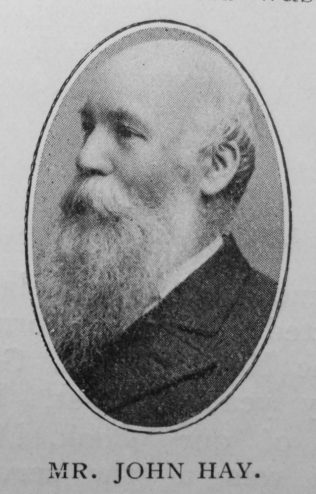 The words “I should like to die in harness” were often on the lips of John Hay, and that wish was literally fulfilled. At four o’clock on the morning of December 8th, at the pitmouth of his day’s work, he passed suddenly from earth to heaven.

Born in the north of Northumberland, all our brother’s sixty-eight years were passed within the limits of that county. For more than thirty-three years acted as overman in one of the Ashington pits, and was beloved for his sterling worth by masters and men alike.

On coming to Ashington as a young man, Brother Hay joined our society, then in its infancy, and until his death, was a faithful member. During thirty-seven years he acted as treasurer, and retained the entire confidence of his brethren. His interest in the services never flagged, and to see him in his accustomed place was always an inspiration to the preacher. Former ministers of the circuit who knew him in his prime give sterling tributes to his character; “Devout and generous; “Always on the side of God and goodness; “A strong, meek man.”

Nature had endowed him with a fine presence, and the attractive exterior was indicative of the soul within. Never assertive, he was strong by virtue of his devotion to his Lord. The funeral, one of the largest ever seen in Ashington, was conducted by Revs. W. Pickering and J.F. Loveday. John Hay was ever busy here serving God and man. We are sure the joy of service is his still.

Note: The marriage record is in the surname “Hays”