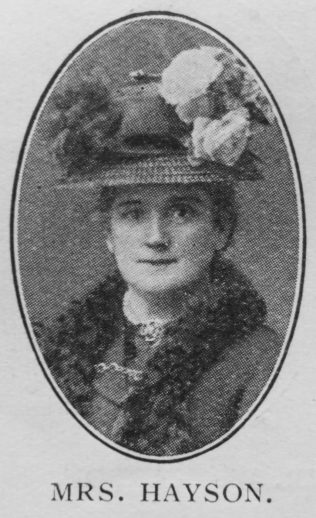 Transcription of obituary published in the Primitive Methodist Magazine by R.H. Auty

Mrs. Hannah Isabel Hayson was born at Grahamsby, near Crook, June 22nd, 1857. In early life she attended the Wesleyan Church with her parents. On her marriage with Bro. Ralph Hayson, a highly respected local preacher at Waterhouses, she became a Primitive Methodist. Sixteen years ago they removed to Quebec, and she became one of our most valued workers.

A cheerful Christian, her life was full of song. Attendance at class was her delight, and her passion for service found expression in many ways. She was an ardent Good Templar, and an active supporter of the Women’s Total Abstinence League. Almost her last work was to visit the public-houses of the district persuading men to leave the drink. Wherever there was distress or sickness she was willing to go, often leaving her bed at the call of duty.

After a brief illness she entered into the life of Heaven, Oct. 3rd, 1909. Her funeral, conducted by Rev. R.H. Auty, was one of the largest ever seen in the locality and attended by the representatives of several Christian and Temperance organisations. The Good Templars held a special service at the graveside. Mr. G.H. Walton, Junior Circuit Steward, preached an impressive funeral sermon to a crowded congregation on Sunday, Nov. 7th.

She married Ralph Hayson (1851-1930), a coal miner, in the spring of 1881 in the Durham Registration District, Co. Durham. Census returns identify two children.