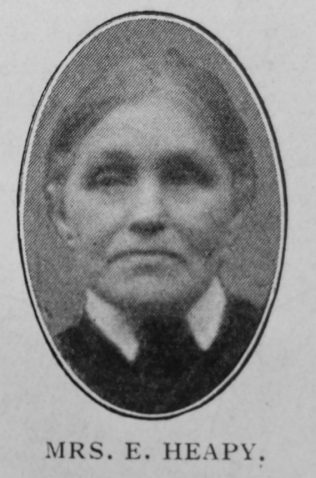 Our Leek church has been called upon to mourn the loss of Mrs. Elizabeth Heapy who, for fifty years, was a local preacher in the Leek Circuit. She was born in 1834, and was blessed with a good religious training. Both her father and mother were local preachers of our church, and when quite a child she was taken by her mother to the class meeting, and she became a member of the church when nine or ten years of age. She had vivid recollections of visits paid by Hugh Bourne to the Leek society and to the home of her parents.

When twenty-eight years of age she became a local preacher, and in the Potteries and around Leek district her services were in great demand for school anniversaries and other special occasions. The last service she attended was a reception meeting to welcome the Rev. J. and Mrs. Binns to the Leek Circuit. At this meeting she took a leading part, delivering a most interesting address, and reciting a long poem, entitled “The Christian’s Armour.” A few days after she was taken ill, and passed away the following Sunday, August 4th, aged seventy-eight years.

Her class leader, Mr. W.S. Austin, says of her:— She was a worthy local preacher, a consistent Christian, a God-fearing and a God-worshipping woman. It was my pleasure to meet her in the Sunday afternoon class for the last fourteen years. Her testimony was always most cheering and helpful. My last visit to her was just before she died. I could see that she would soon have run her race of life. I asked her if all was well. In reply she said, “All, all is well.”

She was interred in Leek cemetery on Thursday, August 8th, and on Sunday, August 11th, a memorial service was conducted by the minister in our Leek Chapel. May we meet her in heaven when our work is done!

Elizabeth was born in 1833 at Leek, Staffordshire, to parents Adam Salt, a labourer, and Mary. She was baptised on 20 October 1833 at St Edward, Leek.

Before her marriage Elizabeth worked with her sister, Ann, as a provision dealer.