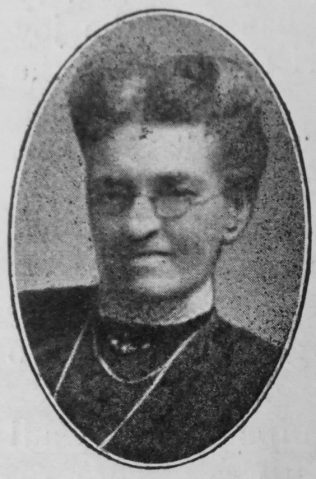 Transcription of obituary published in the Primitive Methodist Magazine by R. Smith

The Traffic Street Church of the Derby First Circuit has sustained a great loss by the death of Sister R. Hendrie. Her affliction was only of fourteen days’ duration, and the news of her death was a great surprise and grief to many. She was born in Bristol, December 24th, 1851, and was brought up in our Ebenezer Sunday School in that city. She decided for Christ when twenty-two years of age. In 1873 she was married to Mr. R. Hendrie. In 1878 they removed to Derby, uniting with our Traffic Street Church, where they have remained until now, except for four years at Borrowash, in the same circuit. While at Borrowash they were members and workers in our Ockbrook Society. They commenced a Sunday School there, and had much to do with the erection of a new chapel.

When they returned to Derby, the husband, wife, and son, became again energetic workers in the Traffic Street Sunday School and Church. Mrs. Hendrie was a woman of much energy and force of character. She was caretaker, Sunday School teacher, assistant class leader, a vice-president of the Women’s Meeting, and had undertaken to be the leader of the Junior Endeavour Society, but death did not permit her to enter upon that important work.

But though she did so much church work she looked well to the affairs of her own home. She was a steadfast, loyal, courageous, willing, cheerful worker for the Lord. She literally died in harness. It is mysterious to us that one so able, so willing, so well qualified for work and in a place where there was so much work to be done, should not be allowed to continue. Yet say we, “The Lord gave and the Lord hath taken away, blessed be the name of the Lord.”

I visited her the day she died, and asked her had she got the victory over sin, Satan, and death, she said, “Yes,” and her “yes” was so emphatic and prompt, that I was quite satisfied all was right. That was about 4 p.m., and she passed away at 7 of the same day, March 3rd, 1908.

The first part of the funeral service was conducted in the Traffic Street Church, the Revs. J.T. Gooderidge, J. Hemshall, G.W. Turner, and R. Smith, taking part. The service was most impressive. Rev. J.T. Gooderidge gave a short but suitable address. There was a large and sympathetic congregation. The remains were interred in the Nottingham Road Cemetery. On the following Sunday a memorial service was held in Traffic Street Church. Rev. G.W. Turner (Circuit Minister) preached an impressive sermon. Rev. R. Smith gave some account of the life and death. of the deceased. May God comfort the bereaved husband, son, and aged mother, and all the members of the family.

Sarah was born on 24 December 1851 at Bristol, Gloucestershire, to parents John, a blacksmith, and Sarah.

Before her marriage, Sarah was a tobacco worker (1871).

She married Richard Peacock Hendrie (1849-1929) , an iron turner, in the summer of 1873 at Bristol. Census returns identify two children.