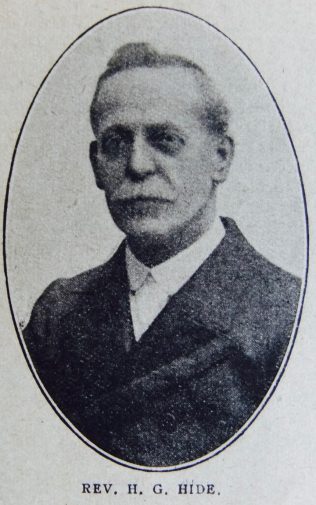 Though Mr. Hide’s name does not appear on the list of ministers, he is in every sense a Primitive Methodist minister. He was born at Baldock in the London I. District. His parents were both members of our Church, his father being a local preacher and the Sunday-school Superintendent for many years. When quite a boy he gave himself to Christ. He and a companion decided in midweek that they would stay for the evening prayer meeting on the following Sunday, and three of them, in fact, were converted that night. In this church there were about a dozen local preachers; men of the valiant order. The best paid among them would receive a guinea per week when there was no lost time, but they knew the joy of prayer and service. The Sunday to them was the luxury day of the week, although it meant a journey on foot, anything from three to twelve miles out and in. No wonder youths were captured for Christ and the Church when such a cordon of godly men surrounded them.

Mr. Hide was put on the plan when between fifteen and sixteen years of age. At that time he was apprenticed to the grocery business, and remained in business life until his twenty-seventh year. The Rev. A. Kempster, the minister of the Baldock station, had paid a visit to the Cambridge 2nd Circuit, where owing to the minister’s ill health, the circuit was without supervision. Without consulting Mr. Hide, Mr. Kempster arranged for him to take up the absent minister’s work. This was his call to the larger service. For five years he laboured at Castleford. He had three unusually happy years at Hendon, Sunderland. Seven years were spent at Wisbech, and up till July of last year he had spent nine years at Thornaby in the Stockton station. He is now engaged with the Rev. J. K. Ellwood on the Clapton Mission.

Mr. Hide is essentially a preacher. He has the preacher’s mind and soul. Out of the living and ever-growing experience of Christian things he is able to speak of the things of God. He has distinct organising and administrative abilities. All these gifts he will need in the churches under his care on the Clapton Mission. He is splendidly supported by his wife and son, the latter of whom has had great success in his professional career. We rejoice in all that they have done for our Church in the past, and anticipate the future with confidence and hope.

Herbert was born in 1861 at Baldock, Hertfordshire, to parents George and Mary. George was a bricklayer.