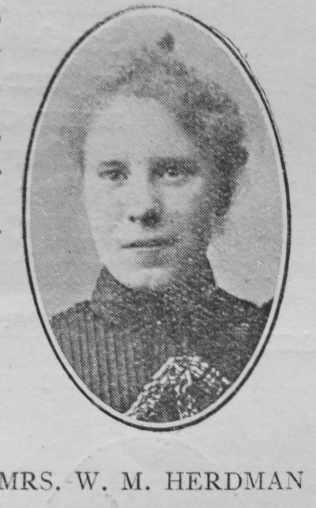 Transcription of obituary published in the Primitive Methodist Magazine by S.K.C. and J.R.

Isabella Roy Herdman was born at Motherwell in 1876. She was reared in a good Presbyterian home, and in connection with some Gospel Mission services at Selkirk, to which she was attracted when in her teens, she yielded herself to God. She became associated with our Church at Mossend on her marriage with Mr. Herdman. She made her husband a beautiful home, so neat, so spotless and well managed, and she early embraced the opportunity of making it a home for the ministers. No little forethought and labour and sacrifice were involved in this, and everything was done with such quietness and precision and cheerfulness. She had a taste for reading, and took an intelligent interest in public affairs. Always ready to help in the work of the Church to the utmost of her power, she was keenly interested in all its movements, and enabled her husband to give a large amount of his spare time to the carrying out of various Church projects. Theirs was a delightful home, bright, cheerful, intelligent, and overflowing with  kindliness and enthusiasm for good things.

Little did we think that the fair, beautiful wife and mother would so soon be removed and leave behind a darkened and shadowed home. There seemed before the young couple many years of joyous and valuable service; but God has willed otherwise, and He knows best. She has gone to higher service, and her husband and three little ones are left mourning.

“Her sun has gone down while it was yet, day,” but she has been only called to service in the Kingdom of God on high.

I have not been able to identify Isabella in online records that I have access to. Can anyone point me in the right direction?