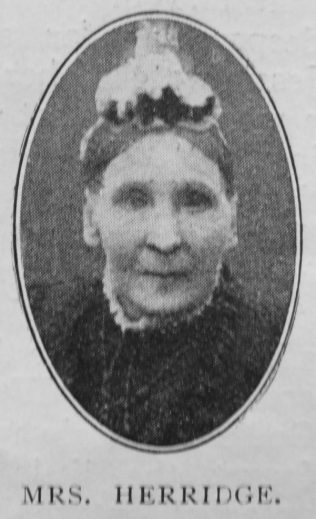 It is singularly pathetic that at the time when many were anticipating the opening services of the Herridge Memorial Church at Springbourne, Bournemouth, Mrs. Herridge should have been called to join her husband in the Heavenly Temple. After a brief illness, she passed away on July 12th, 1909, in her 76th year. She gave clear testimony of the reality of the Grace that saves. The memory of her sainted husband greatly occupied her thoughts, especially as the end drew near.

On July 16th the mortal remains were laid to rest with those of her husband in Boscombe Cemetery. The funeral ceremonies were shared by Revs. George Doe, J. Wellings, F.S. Button, J. Leach, S. Ainsworth, and B.B. Portnell. An address was delivered at the graveside by Rev. J. Wellings, and Rev. J. Leach paid a warm tribute to the worth and work of the departed. Similar tributes have also been expressed in letters from Revs. T. Phelps, G. Litten, and other friends. Many are grateful for the helpful ministries of the life of this departed sister.

Her father and mother, John and Mary Ann Williams, were members of the Wesleyan Church at Charlbury, Oxon, where Rachel was born October 27th, 1833. Converted in early life, she became a Sunday School teacher. Her marriage with Rev. James Herridge took place in 1857. A faithful wife and devoted mother, the hallowed influence of her life has left its mark for good upon the family, who, though called to experience the painful loss of such honoured parents, yet rise up to call them blessed.

She married James Herridge (1824-1905) in the summer of 1857 at Witney, Oxfordshire. Census returns identify seven children.