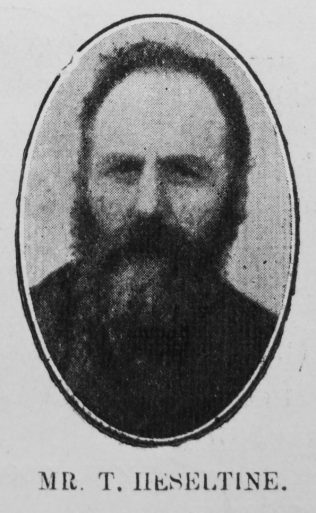 Brother Thomas Heseltine, of Newbiggin, exchanged mortality for life on Tuesday, March 9th, 1909. Five months before he was compelled to give up work. It was thought at first that he was suffering from a complaint which would soon be cured, but symptoms of a serious nature developed and the doctors pronounced it incurable. He suffered extreme pain, but had intervals of relief. All that medical skill and tender nursing could do, was done, but in spite of all the insidious disease steadily developed. The courage and patience with which he bore his lot are beyond praise. No.murmur escaped his lips, and to the end he retained unbounding confidence in God.

To the writer he said, “I am thankful that I have not salvation to seek now my pain is so intense.” He strangely entertained hope of recovery, but expressed complete resignation to the will of God.

Mr. Heseltine was born at Newbiggin, and with the exception of a few years at Liverpool, where he was engaged in the milk trade, which was distasteful to him, because it interfered with his religious duties on the Sunday, he spent the whole of his life in his native village engaged in the building trade.

He married Miss Falshaw in 1874, who proved a true helpmate to him. We cannot relate the circumstances of his conversion, except that he was one of tie fruits of Miss Hyde’s evangelistic zeal. He joined Thoralby Society and filled many important, positions with credit to himself and benefit to the Church. Religious duty was never a cross, but a delight. For about forty years he was a local preacher, scrupulously attending his appointments, Methodistic in doctrine, plain and forceful in exposition. Many were helped by his sermons. Being superintendent of the Sunday School he was deeply interested in the welfare of the young.

As a sick visitor he excelled, and a very large number visited him. His end was peace.

The interment took place at Aysgarth; a large number gathered to pay a last tribute of respect to one of sterling worth.

Thomas was born abt1847 at Newbiggin, Aysgarth, Yorkshire, to parents John, a farmer of 11 acres and labourer (1851) and Margaret.