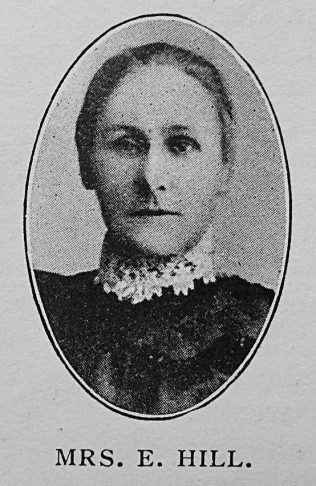 The North Evington Church, in the Leicester Third Circuit, has sustained a serious loss in the passing of Mrs. Eliza Hill, the beloved wife of Councillor Alfred Hill. Mrs. Hill, who was the daughter of Mr. Joseph Harvey, was born at Birmingham, and brought up in the Lord Street Church, where she sang in the choir. Upon the removal of her parents to Leicester, she became a member, teacher, and player in the Chandos Street Mission, and in the Clipstone Street (Melbourne Road) Church, which grew out of it. She and her husband were valuable workers there for many years. Some fifteen years ago, Mr. Hill undertook the responsibility at the North Evington Mission.

Mrs. Hill has supported her husband in his most useful work there as School Superintendent, local preacher, class leader, and Trust secretary, as also in the civic positions and duties which have come to him. While of a retiring disposition, she was a genuine and gracious soul, and was widely respected. She suffered long and painfully from a malignant internal growth, which caused her death on Thursday, January 26th, 1911. The funeral service was conducted by Rev. S.A. Barron and G. Hallam; and the latter conducted a memorial service at the North Evington Church.

Eliza was born in 1860 at Birmingham, Warwickshire, to parents Joseph Harvey, a district agent (1881), and Hannah Mason.

Before her marriage Eliza worked as a shoe machinist (1881).