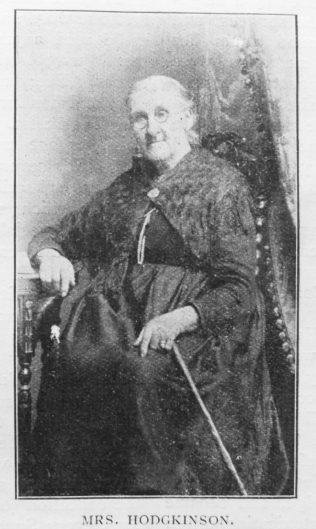 Transcription of article in a series “Modern Conversions” by Rev. Arthur Jubb

EIGHTY years ago the central attraction of the Hull Fair (still famous all over North Lincolnshire and the East Riding of Yorkshire) was a travelling theatre. The proprietor, whose name was John Jones, was in many ways a remarkable man. Standing seven feet high, with pink eyes, and white hair hanging in a long plait down to his knees, he attracted attention wherever he appeared. For his second wife he married a veritable Amazon, whose height was six feet, two-and-a-half inches. She was the daughter of a prominent resident in Knottingley, and married the showman against the wish of her parents. To them, at Boston, in Lincolnshire, on May 7th, 1832, a daughter was born. She was named Christiana, and is the subject of this story.

As a child, she was trained to sing and dance on her father’s stage, but while yet a girl her father died, during the time the great Hull Fair was being held in the Pottery Field. As soon as the funeral was over, the grown-up sons turned out the stepmother and her children, who were hard put to it for a livelihood. The mother took her daughter Christiana from public-house to public-house, where they sang and entertained for what money could be obtained. As the girl grew up to womanhood, she was caught by the arresting ways of the Primitive Methodists. Reared as she was amidst scenes of excitement, the enthusiastic services of our fathers appealed strongly to her, and she soon threw in her lot with them, using her voice in the service of song. She attended the old chapel in Mason Street, and was the first female singer in Clowes Chapel after it was opened, and later became leading singer at West Street. This was in the days when William Clowes was a regular worshipper there. She was one of the great host, who—when William Clowes was buried — took part in the procession, which sang all the way from Clowes’ home to the Spring Bank Cemetery.

In those years she was converted, but never got a clear understanding of what conversion meant, and the effects did not continue. Later, she married a man named Hodgkinson, who had no interest whatever in religious things, and during many years which followed, she seldom attended a place of worship. yet all the time there remained a hankering after Primitive Methodism, and occasionally she went to a service. When her children were grown up, she began to go to chapel again. She attended one of our churches in Hull for eight years, but little notice was taken of her. Then she felt— whether rightly or wrongly I cannot say —that she was despised because of her poverty, so she discontinued her attendance, and a spirit of bitterness seemed to take possession of her. For many years she remained an outsider, growing all too fond of beer, which was the curse of most of the women round about. It seemed as if all the religious impressions of her girlhood had passed away for ever, and that she would live and die an unrepentant sinner. But God fulfils Himself in many ways. It was not for nought that she had listened to the Venerable William Clowes and to other fiery preachers, and though nearly seventy years of age, the day of a new birth was dawning.

In February, 1902, Mrs. Coates, of Bridlington, was conducting. mission services in our Hessle Road Church. Mrs. Hodgkinson was constrained by a neighbour to attend one of the services, and in that meeting she found again her Saviour. The buried memories were awakened, old-time feelings took possession of her heart, and she was thrilled by the Divine touch. She sat listening to the spoken word, and the Spirit of God won in her a great victory. Feeling that she must be saved now, or perhaps her last opportunity would be gone, she decided upon a full surrender to Christ. Between her and the end of the pew several women sat, and during the prayer-meeting Mrs. Coates spoke to these. Though never a word was spoken to her, Mrs. Hodgkinson was wishing these women would leave the pew, and as soon as they did so, she got up and went to the communion rail. Yielding herself to Christ, she also vowed she would be a total abstainer, and would not henceforward touch, taste, or handle the unclean thing. Next day she signed the pledge, and became the resolute enemy of intoxicating drink. Her neighbours tried hard to induce her to join again in their beer-drinking, but to this day she has kept her vow.

Her life since her conversion has been one of fine devotion to Christ and His Church, and the Lord has restored to her soul the vears which the locust devoured. Her growth in grace and goodness has been very marked. Her testimony—in Band meeting and love-feast—is often most pathetic. That she was seventy years of age when she gave herself to God is the one fact she can never forget, and that she lived so long without salvation is the one thing for which she cannot forgive herself. Her anxiety to redeem the lost years has been very great, and has borne good fruit.

Her generosity has been great. She is very poor, and in the early hours of every morning goes her rounds as a knocker-up, by which she earns a few shillings a week. She is often so lame with rheumatism that she can hardly walk, but from two until six she goes up and down the streets awaking the sleepers. Yet with her small income of a few shillings she always gives silver to the collection (of which there are two at least every Sunday) and tries to support the special efforts of the church in every way. When Rev. Geo. Bennett and myself made a special appeal for increased contributions to our Missionary funds, she decided to make an effort to respond. And before the next Missionary Anniversary she handed me a money-box, in which were over eight shillings—all in three-penny pieces. Could the story of these threepenny contributions be fully told, it would put to shame multitudes of our people. If equal generosity marked every Primitive Methodist, our Missionary income would be increased tenfold.

Humble, earnest, prayerful, consecrated, she holds on the heavenly way, and both in the church and in the neighbourhood where she lives, she counts for Christ. Her life to-day is a memorial of God’s grace.

Christiana was born on 7 May 1832 at Boston, Lincolnshire, to parents John, a showman, and Sarah. She was baptised on 13 May 1834 at St Botolph’s, Boston.

Christiana died in the spring of 1917 at Hull, Yorkshire.