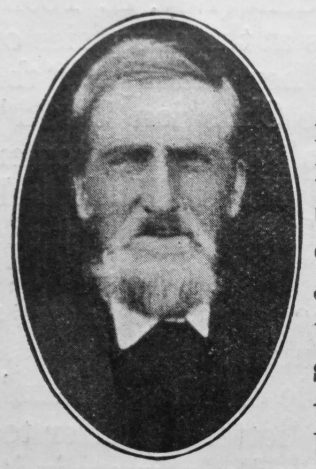 Transcription of obituary published in the Primitive Methodist Magazine by L. Sangster

Mr. Bryan Hodgson was born at Stonechester, a farmhouse nearly two miles from Hamsterly, in the St. Helen’s Auckland Circuit, and died at Etherly, January 29th, 1908. He was converted at Toft Hill sixty years ago and since that time has been a member of our church. He rendered useful service as Society Steward and Class Leader, and was a trustee for upwards of fifty years. A regular attendant at the means of grace, Mr. Hodgson was a loyal Primitive Methodist of the old type, and a liberal supporter of all the church funds. Quiet and unassuming in manner no one who knew our brother could doubt his sincerity.

His funeral took place February 1st, and was attended by a large number of relatives and friends. A short service in the house was conducted by Mr. W. Wilson, and the Burial Service was read by the rector of the parish. Five sons and two daughters are left. One son, Mr. George Hodgson, is a local preacher in one of our London churches; other two, John and Bryan, are members at Shildon, and Robert is a member of our Jesmond Dene Church in Newcastle. The daughters are also members.

“Blessed are the dead which die in the Lord.“

Bryan was born on 16 December 1827 at Stonechester, Hamsterley, Co. Durham, to parents Bryan, a farmer, and Ann. His birth is recorded in the register of the Baptist Chapel at Hamsterley.