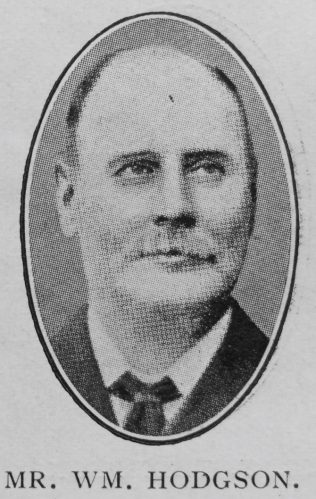 A notable personality has been removed by the death of Mr. William Hodgson, J.P., of Worsley, Manchester. He died April 29th, 1910, in his 60th year. His father, Mr. Christopher Hodgson, was a loyal Primitive and great worker, and the son was equally loyal and devoted.

A member for forty years, he held many important positions, and liberally supported our cause. For a long time he lived about five miles from his church, but his interest never weakened in Trafford Road, and winter and summer he was seen in his place. In the Business Meeting he was invaluable, being full of good feeling, tact and power, and in the Prayer Meeting it was a benediction when he poured out his soul in supplication. Truly our brother was a cheerful, optimistic, winsome, noble soul; he scattered sunshine everywhere, and had an encouraging word for all. He cherished lofty ideals and laboured without ceasing to realise them.

In his home he appeared at his best. As a husband he was tender, generous, devoted; as a father he took the keenest interest in the whole life of his children; he was as a brother to his sons, and companion to his daughters.

In business he overcame great difficulties and built up a noble reputation. His large staff of work-people held him in the highest regard. He ardently devoted himself to public duties. His abilities were quickly recognised when he was elected to the Salford Council, and he was at once placed in positions of great trust. He was made a Justice of the Peace in 1907. He made war on all evil social conditions. He put his religious principles into all he did. He was supremely devoted to Jesus Christ. The passing away of such a man, so fine in spirit, so full of services for the public good, and so devoted to his home, has been an unspeakable loss. But our loss is his eternal gain.

William was born in the summer of 1850 at Salford, Lancashire, to parents Christopher Hodgson, a machinist (1861), and Mary Fawcett.