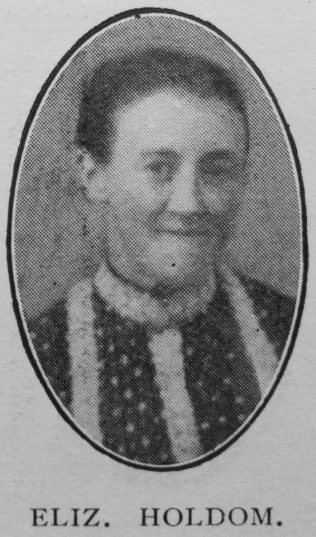 Mrs. Eliz. Holdom, of Drayton Parslow, was but 47 years of age when she passed away. She was the devoted wife of Mr. Arthur Holdom, the organist of our Church here. She never knew what it was not to love the Saviour, and her religion was deep and real. It had need to be, for the trials she was called to undergo, but she was never known to complain. As she lay dying in her room, her youngest boy was suffering from an incurable and wasting disease in the next room.

This dear sister had no thought of self, she simply lived for the welfare of others, and though suffering as few are called to suffer, she kept cheerful and even joyous. She was specially and tenderly nursed by her only daughter who, with the sorrowing husband is left to care for the three motherless boys. May the God of all comfort sustain the emotions of those dear ones.

Elizabeth was born abt1864 at Drayton Parslow, Buckinghamshire, to parents Thomas, who worked the land, and Elizabeth.

Before her marriage Elizabeth worked as a straw plaiter (1881).