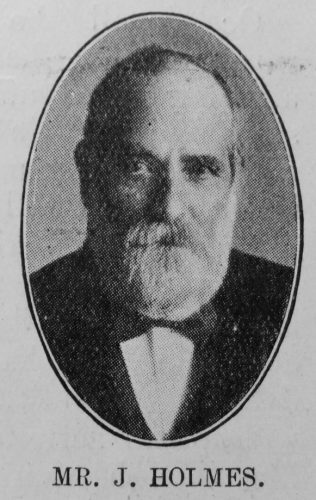 Mr. John Holmes was born at Marsden Moor in 1842. Derbyshire has become impregnated with Primitive Methodism and no part of it more than the North East.

Here our esteemed friend was born, here he lived and died, leaving behind him the fragrant. and precious influence of an unselfish and consecrated life. Converted while yet a boy, he began to preach at the age of fifteen, and as an indication of the depth of his piety it deserves to be mentioned that prior to this he read his Bible through on his knees. He was very zealous, and walked long and heavy journeys, Sabbath by Sabbath, to preach the Word of Life—Marsden Moor Society in those days being part of what was then the Chesterfield Circuit.

While still a youth he took a keen interest in Sunday School work, and in 1872 entered the office of superintendent—a position he faithfully and efficiently filled during the remainder of his life. He became a class-leader in 1884, and four years later circuit steward of the Staveley Circuit which had been separated from Chesterfield. As a class-leader he rendered distinguished service, his class becoming subsequently one of the largest in the circuit.

With characteristic loyalty he gave ungrudging service to his church, and when in the later years of his life an internal disease limited his opportunities he cheerfully acquiesced, never slackening his devotion and interest, but patiently waiting God’s own good time until he was called to higher service. For several years he was a member of the Derbyshire County Council—a position he filled with much public satisfaction.

On May 6th, 1909, in the sixty-seventh year of his age, he was called to his reward, and three days later his remains were laid to rest in the Staveley Cemetery—the interment being conducted by the Rev. S. Barker, Superintendent of the circuit. Here a multitude of people assembled to show their love and esteem for a good man, one who for over half a century, amid ecclesiastical and other adverse influences, had stood heroically for righteousness, progress, and Free Church principles.