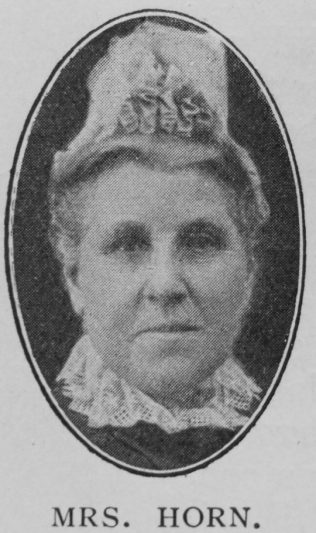 Transcription of obituary published in the Primitive Methodist Magazine by A.J.C.

On November 9th, 1910, at the age of 76, there passed to Heaven, Mrs. Horn, of Newbiggin (Ashington Circuit). Some twenty-two years ago she was an ardent worker in the Ashington Church, and when the new church was erected she actively supported the scheme. One of God’s good gifts to our Church, her presence was like a gracious dawn. Her personality was rich and fragrant, her home was the abode of overflowing hospitality. Her gracious and many-sided ministry gave hope to many a tired heart and despairing soul. She carried music in her heart wherever she went. Her whole life was full of kindly ministry and tender attachment, and now that her bodily presence has gone, her family know they have lost a most devoted mother, her husband a gentle, helpful wife, the Church a loyal supporter of its institutions, and we all have lost one of the gentlest lives it has been our privilege to know.

Ann was born abt1834 at Hull, Yorkshire, to parents Joseph, a mariner, and Diana. She was baptised on 11 January 1834 at Holy Trinity, Hull.