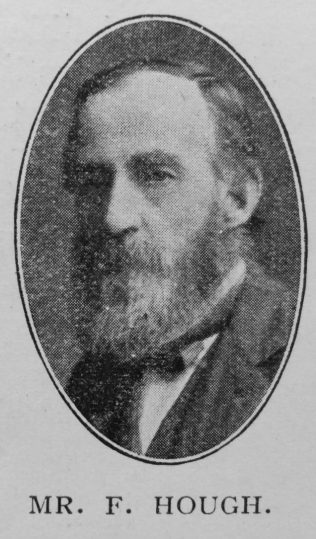 Transcription of obituary published in the Primitive Methodist Magazine by W.A. Eyre

After a long and tedious illness, Mr. Frederick Hough, of Stafford, departed this life, December 30th, 1910, at the ripe age of seventy-four. Until his health failed, some two years ago, he had been a most strenuous worker, putting energy, intelligence and conscience into whatever he took in hand. To the construction of a house or the building of a character, he gave his best. Converted in 1859, he became a local preacher in 1860, and for close upon fifty years tramped long distances, in all weathers, to carry the “good news.”

During forty years’ service as a Sunday School teacher, Bro. Hough won the love of his scholars by his rare tact and patience; and, by his sound sense and gracious spirit, helped to shape the lives of many who occupy positions of prominence in the world of commerce and in the Church to-day. The Rev. E.T. Lloyd, an honoured minister in Australia, was one of his scholars. Mr. Hough was a class leader for thirty-six years or thereabouts, and a trustee for our Stafford Church for twenty-eight years.

On January 3rd, 1911, his remains were laid to rest in the Stafford Cemetery; previous to which an impressive service was held in our own church, conducted by Rev. W.A. Eyre. The Rev. F.L. Cull, formerly a member of Mr. Hough’s class, and Mr. Charles Banks also took part in the service. The latter had known our departed friend very intimately for a long period and gave an exceedingly choice and appropriate address. On the following Sunday evening a largely-attended memorial service was conducted by Mr. W.F. Lloyd, who had been associated with Bro. Hough for many years in Christian toil and fellowship. Letters were read from various ministers who had enjoyed the friendship and been favoured with the whole-hearted co-operation of Bro. Hough during their ministry in Stafford Circuit.

Frederick was born in 1836 at Teddesley Hay, nr. Penkridge, Staffordshire, to parents John Hough, a shepherd, and Amelia Garratt. He was baptised on 29 May 1836 at Acton Trussell and Bednall, Staffordshire.