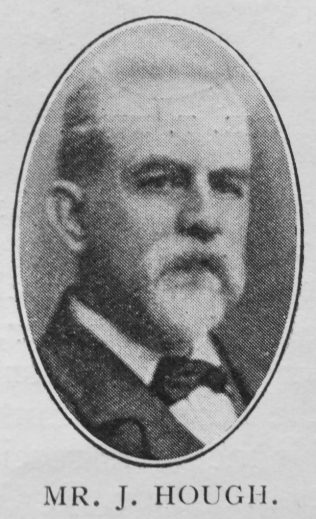 Transcription of obituary published in the Primitive Methodist Magazine H.R.D.

James Hough was born in 1846, and died September 17th, 1908. He became connected with our Church at Frodsham at a time of difficulty and transition, for the lease of the cottage chapel where our people worshipped had expired, and Mr. Hough, though belonging to another Methodist Church, kindly threw open his house for services, and he and his family joined our Connexion. In course of time the present Sunday School was erected, and our friend served thirty-three years as organist, twenty-one years as Secretary to the trustees, whilst for many years he was Society Steward and Chapel Steward.

His Christian character was marked by the strictest integrity and the sweetest kindness. He was a kind husband, a good father, a faithful friend, and an earnest Christian. His home was always open to the preachers of the Gospel.

During the last twelve months his health failed rapidly. His last visit to the Sunday evening service was three weeks before his death, and the effort caused him much pain and fatigue. He took to his bed the following week, and passed away in sleep, September 17th, 1908. The funeral service was largely attended, being conducted by Revs. J. Rollason, T. Lagar, H.R. Didcock. He is much missed, both in his home and in the church, but we hope for a happy reunion in the Homeland.

He married Elizabeth Hulse (1847-1928) in the summer of 1867 at Frodsham, Cheshire. Census returns identify five children.