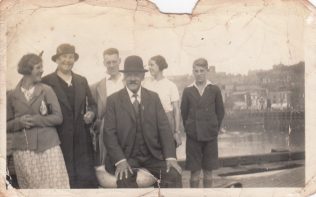 Transcription of obituary published in a local newspaper

Darley has suffered a great loss in the death, at the age of 68, of Mr George Houseman of Fairfield Farm. Although he had been in failing health for some time, the end came very suddenly and peacefully on Monday morning.

He was the second son of the late Mr Thomas Houseman, of Cherry Tree Farm, and was born at Pine’s Farm, Craike Lane. For the past eight years he has been a member of the Pateley Bridge Rural Council, succeeding his brother, the late Mr John Houseman, who represented Darley for twenty years.

He was a leader of the Birkhill Road Methodist Church (former Primitive Methodist) and continued to attend to the last. For many years he taught in the Sunday School, and was a leader of the Christian Endeavour. A well-known local preacher, he served on the former Primitive Methodist plan in the Pateley Bridge Circuit for many years. One of the early members of the Darley Band of Hope, he helped in the formation of the Rechabite Tent, and for many years he was a member of the old Darley Temperance Band. For sixteen years he acted as choirmaster at the chapel, and on leaving the district in 1909, to farm at Hawksworth, he was presented with a Bible in recognition of his services. He returned to Darley in 1920 , to reside at Fairfield Farm.

An efficient farmer, he was well known in Nidderdale and Wharfedale and used to attend regularly at the Pateley Bridge and Otley auction marts. Passionately fond of his chapel, his loss will be keenly felt. He leaves a widow, three sons and three daughters.

The internment took place on Wednesday, at the Dacre Congregational Church, in the presence of a large gathering, and was conducted by the Rev. T. S. Shaw of Glasshouses. The Rev. E. C. Ferriday, of Yarm-on-Tees (former Primitive Methodist minister in the Pateley Bridge circuit) who was expected to assist with the funeral, was unable to attend. A service was held at the house, when the hymn “Jesu, lover of my soul” was sung. A service followed in the Birkhill Methodist Chapel. Mrs F Houseman (sister in law) was at the organ and played “O Rest in the Lord” as the cortege entered the chapel and the “Dead March” in “Saul” on leaving. The hymns sung were favourite hymns of the deceased – “There is a land of pure delight” and “Give me the wings of faith to ride.” In a brief address, the minister paid tribute to the life of Mr Houseman and said that as a leader of the chapel he had always endeavoured to serve his God.

George was born in the summer of 1868 at Menwith with Darley, Yorkshire, to parents Thomas, a farmer, and Mary.

He married Mary Abigail Clapham (1882-1970) in the summer of 1906 in the Wetherby Registration District, Yorkshire. Census returns identify six children.