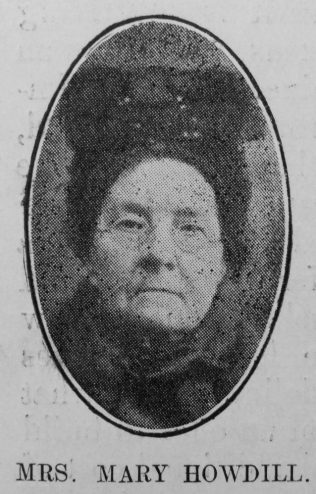 Transcription of Obituary published in the Primitive Methodist Magazine by G.A.

In the translation of Mrs. Howdill to the higher service the Rehoboth Central Misssion, Leeds, has lost another valued member and helper. Her mother was a devout Wesleyan and when the Primitive Methodist preachers first came into the Richmond district the home was thrown open to them for their preaching services. When a society was formed; most of the nine children became members, and such was the influence of the home life of those days that Mrs. Howdill was never heard to speak of a definite date of conversion. She grew into the Christian life and became a member of the Primitive Methodist Church about the year 1840. That membership was unbroken to the end of life.

Associated with those early days are memories of men like Ralph Fenwick and James Jackson who spent their probation on Richmond Circuit.

During her long connection with Rehoboth Church, Mrs. Howdill has been a most earnest helper and generous supporter. Her needle was ever busy for the church, and in later years when she was not able to take as active a part as formerly in the work of the church, the needle was still industriously employed, even to the last days of life.

Mr. Thomas Howdill  has been circuit steward for many years, and in the old days, when Rehoboth was head of the present third, sixth, and seventh Leeds circuits he held the same position, Mrs. Howdill proving a helpmeet indeed, providing Quarterly Meeting teas and performing. well the duties that fall to a steward’s wife. Many of our ministers testify to the happiness of the hours spent in her home, and to the thoughtfulness and consideration of one who was ever a minister’s friend. She was kindness itself, and her unselfish solicitude for the comfort of those around her was a constant feature of her life. We think of her as translated to a higher service, having been faithful in that which was least.

Mary was born in 1826 at Tunstall, Catterick, Yorkshire, to parents Joseph, a labourer, and Ann. She was baptised on 12 March 1826 at Catterick.

Mary died in the summer of 1908 at Leeds, Yorkshire.