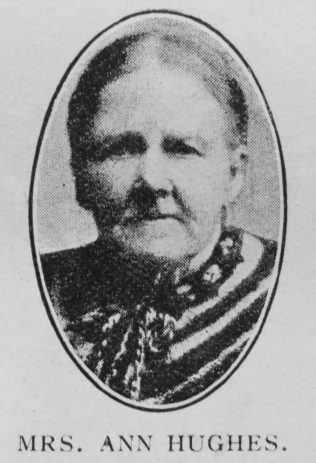 The Higherland Church, in the Newcastle-under-Lyme Circuit, has suffered a heavy loss by the ‘‘passing’’ of our beloved sister in her 78th year. She was born, lived, and died in the town. Out of 77 years Mrs. Hughes spent 55 in Higherland, close to the House of God.

Born in 1832, she was married in 1851. Four children were born of that happy wedding, two sons and two daughters, the latter being active members with us now. All were trained in our Sunday School, and their spiritual welfare ever lay near the heart of this devoted mother. The love showered upon her children has been reciprocated, and durIng fifteen years of widowhood they have bestowed upon her unstinted care and attention. It was a delightful thing to observe the filial affection in this family.

Our late Sister Hughes attended and regarded the Higherland Church as her religious home for over fifty years. Her husband died in the faith, and was buried amid lamentations. That  event marked a gap in the life of our sister, which has never been quite filled. Though happy and contented she has ever been looking forward to reunion.

Her sufferings were great, but patiently borne, supported by grace divine. For six years the cords of her earthly tabernacle were loosening, and on two occasions it was thought she could not possibly recover, but she lingered on until December 12th, 1909, when beautifully and peacefully she passed away. A very short time before the end she said,

“I have finished the work
Thou didst give me to do.”

We laid her to rest in the town cemetery on December 19th, amid every sign of respect and veneration. The writer conducted on Sunday evening, January 9th, 1910, a memorial service.

Ann was born in 1832 at Newcastle under Lyme, Staffordshire. I have not been able to identify her parents in online records.

Ann died on 12 December 1909 at Newcastle under Lyme, Staffordshire,