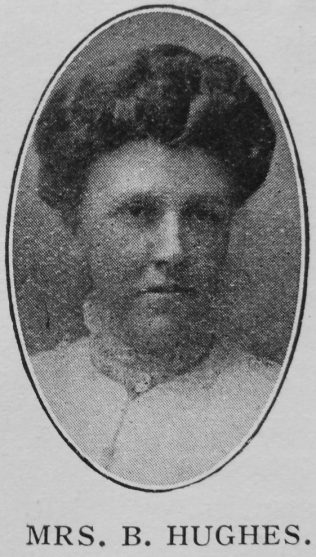 Transcription of obituary published in the Primitive Methodist Magazine by A.A. Birchenough

Mary Sophia (Pollie), the beloved wife of Mr. Benjamin Hughes, secretary of the Stafford Circuit, entered into rest on March 20th, 1911, at the comparatively early age of fifty. Nearly the whole of her single life had been spent at Wem, Salop. For thirty years she had been a devoted member of our Church. As a Sunday School Teacher, Church, and Temperance Worker, active Christian Endeavourer, and member of the Choir, she rendered valuable service. She was highly gifted, intelligent, and an ardent Christian. As recently as August Bank Holiday, 1909, she was united in matrimony to Mr. B. Hughes, of Rugeley, Staffs., who deeply mourns her irreparable loss.

During her brief residence in the Stafford Circuit she was highly respected for her geniality of character, her unstinted hospitality, and her deep interest in the welfare of Zion.

For the past few months previous to her decease she had been a great sufferer, and had undergone a most painful operation in Wolverhampton Hospital. Her sufferings were borne with exemplary fortitude, and doctors and nurses bear testimony to her patience and trustfulness. Shortly before she entered within the veil, she expressed her confidence that the Divine Father did all things well.

The funeral took place at Wem, on March 24th, when a deeply impressive service was held in the Church, which she had so regularly attended and was so closely associated with her earlier womanhood, and was conducted by the Revs. Isaac Ashworth, W.A. Eyre, and Mr. Arthur Lloyd. In the presence of a large number of sorrowing relatives and friends her mortal remains were laid to rest in the Wem Cemetery. On the following Sunday evening an “In Memoriam” service was  conducted in the Wem Church by the Rev. Isaac Ashworth.

Pollie was born in 1860 at Willenhall, Staffordshire, to parents Jonathan Lewis, a police constable (1871), and Margaret Frances Morgan.

Before her marriage Pollie worked as a domestic cook (1891).