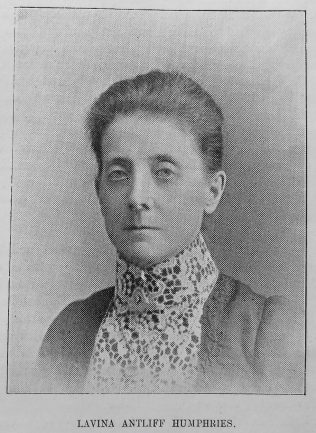 AT a time when the growth of interest in our missions has led to the formation, with the sanction of Conference, of the Women’s Missionary Federation, it seems not unfitting to recall one who, though no longer with us, did much within the sphere of her influence to make this forward movement possible. Surely if at that afternoon meeting at Southport in the Mornington Road Church, when the women of Primitive Methodism were making history, there were present any of the sainted dead, among such unseen but interested spectators there must have been the spirit of the late Mrs. Humphries. As the daughter of Dr. Samuel Antliff who, in advocacy and administration, was one of the greatest missionary secretaries God has ever given to our Church, her interest in missions was  almost an instinct.

To those who remember her best by the effective work which she did on the platform, it will seem strange to be told that it was only during the last eight years of her life that she engaged in public speaking. Prior to that time she confined herself to teaching in the Sunday School and to other quiet and unobtrusive work, of which a Temperance pledge-book drawn up by herself and containing many interesting signatures, is a typical example. Her sympathy with young people was always keen. She understood them and believed in them.

Hence when she and Mr. Humphries removed to the Chesterfield First Circuit, and the Christian Endeavour Society at the Holywell Cross Church seemed to demand her service, she gave herself with enthusiasm to the work. The weekly meetings grew in attendance and profit, weak places in the organisation were strengthened, new forms of activity were devised, until the C.E. Society became one of the most potent spiritual forces in the Church.

She had in a unique degree the gilt of leadership. This soon became recognised in Chesterfield, for her work and influence within our own community led to calls being addressed to her to speak at Endeavour rallies, gatherings for women, and Temperance meetings.

In this fashion she found her way to the public platform. Finally she was elected President of the C.E. Union for Chesterfield and district, rendering in this office service so much appreciated that there was paid to her the unusual compliment of election for a second term. She very much enjoyed this wider activity, and on this account felt it a wrench to leave Chesterfield. When the call came somewhat abruptly to pass on to Manchester because of her husband’s appointment as tutor at the College, she told him somewhat pathetically that she could quite understand that it was right for him to go, since he seemed to be removing to a sphere of evident usefulness, but that for her the change seemed to be a passage from full and happy service to absolute inactivity.

Yet how groundless were her fears! Little did she think that the years, brief as they were, of her life in Manchester were to be the most fruitful of all. Her fame as a worker and speaker on behalf of Christian Endeavour followed her, and she was soon almost as busy in that movement as she had been in Chesterfield, the crown of her service in this direction being the address which she gave at the National C.E. Convention held in the Metropolitan Tabernacle in 1904. Before this, however, the missionary cause had claimed her enthusiasm and service. With an eye for large issues, due to the gift of statesmanship which she had inherited from her father, she conceived the idea of gathering the women of Manchester Primitive Methodism into an organisation which should aim at deepening missionary interest, and thus to increase missionary revenue. Few know what it cost her to carry this idea into effect. She wrote countless letters, saw individuals privately, addressed meetings at various societies in advocacy of her scheme, with the result ultimately that her enthusiasm became infectious. The hostile were disarmed, the indifferent became interested, and in the end the organisation of which she had dreamed came into being. How fruitful that service was will appear from the fact that, at the Manchester Conference of 1906, this comparatively new organisation undertook the whole of the arrangements for the missionary day, and had the satisfaction of handing over to the treasurer what was up to that time for such a day the record sum of over £157.

She had great dreams of the future of women. In all realms, the State as well as the Church, she felt that woman had yet to come into her inheritance. One of the things which troubled her was that, except as the wife of a missionary, our foreign missions offered no opening for a woman’s service though happily that defect has quite recently been somewhat rectified.

Speaking once on woman’s work in our Church she very much amused her audience by telling them that she had gone carefully through the Consolidated Minutes, and she had found that nothing, not even access to the Presidential Chair, was forbidden to a Primitive Methodist lady save one thing—she was not to accompany the preacher home from his appointments—and she herself suspected that even this prohibition was sometimes ignored.

On the platform she never forgot that she was a woman, and some who had prejudices against women engaging in such work, had their objections removed, when they saw the quiet dignity with which she comported herself. Speaking with an absence of gesture, but allowing what was lacking in that way to be more than made up by the modulation and emphasis of her voice, she played upon many chords, often sending a ripple of laughter over her audience by a pawky stroke of wit, or touching the emotions by some homely illustration.

The great feature of her public addresses was their perfect lucidity. With her mind disciplined to clear and correct expression by her wide reading of the best literature (slang and slipshod English her soul abhorred), and with quick sympathies that enabled her to get into touch with any audience, she was always heard with delight. Yet no one could listen to her without feeling that the cause for which she was pleading was more to her than anything else.

After her speech at the missionary meeting in the Metropolitan Tabernacle she said to her husband, “Do you know what I was doing just before I was called on? I was praying that my voice might be given the right keynote, so that I might speak without strain, and yet make everybody hear.”

Much as she sometimes amused her hearers she was never content merely with that. Behind all her play of wit and use of telling illustration there lay a seriousness of aim, betrayed always by her voice, which had in it a peculiar note of feeling that got at the heart-strings, so that even strong men, as they listened to her, did so with shining eyes and with the tears not far away.

But those who only knew Mrs. Humphries in her public work, did not know the deepest and best in her. It was in the home and to her intimate friends that she revealed her true self. The growth of outside claims was never allowed to interfere with the discharge of her domestic duties. She counted for much in the home. Will her children, I wonder, ever forget the tales, full of marvellous adventure, and all spun out of her lively fancy, with which she used to beguile them at bedtime? And as for her husband he knew better than anyone else the soundness of her judgment, the optimism that chased away moods of depression, and the unselfish devotion with which she always put others before herself.

A tender article, entitled “The Delights of Being Ill,” written by her during her last months of illness, and published anonymously in the “Primitive Methodist Leader,” sheds light upon what her home was to her. He who knew her best testifies that, through the nearly fifteen years of their married life, he cannot remember her ever doing a mean or unworthy act, or saying an uncharitable word. She was a Christian lady, good with a goodness which was all the more alluring, because it was so sane and human. So in other lives she still endures, and being dead she yet speaketh.

Yes, and she herself lives, too. To think that death has meant the extinction of that pure, brave, strong nature is to charge the Almighty with a criminal waste. We cannot but believe that He took her, all too prematurely from our point of view, because He had other work elsewhere for her to do. To her has been given what she would most have desired, “the wages of going on.”

In the programme of the service followed at her interment, the printed sheet, after telling when she was “born into this earthly life,” stated concerning her decease, not that she had “died,” but that she had been “born into the heavenly life, January 30th, 1907.” After all was not that the true way of putting it ?

“There is no death; what seems so is transition.
This life of mortal breath
Is but the suburb of the life elysian,.
Whose portal we call death.”

Sure are we that in some other sphere, veiled as yet from our eyes, she of whom we have spoken still labours for truth and righteousness, and finds her rest in the perfect service of her Lord.

Lavina was born in early 1856 at Loughborough, Leicestershire, to parents Samuel Antliff, a PM minister, and Judith Norris.

She married Albert Lewis Humpries (1865-1950), a PM minister, in the summer of 1892 in the Shardlow Registration District, Derbyshire. Census returns identify three children.