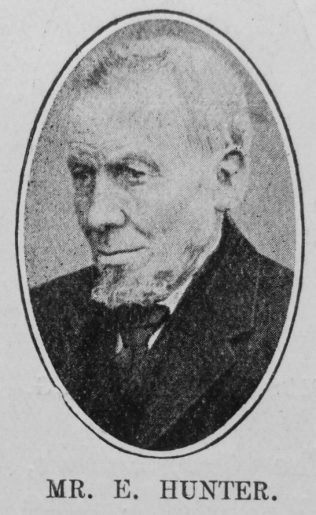 The Whitehaven Circuit has suffered a serious loss in the death of Mr. Edward Hunter, at the good old age of seventy-four years. He belonged to the old school of local preachers, and for the last forty-five years no man was more acceptable in the pulpits of the district. The deceased was a native of Haltwhistle, and in early life was much impressed by secularism, and a regular reader of “The National Reformer.” He decided, however, to read the Bible for himself, and this led to his conversion.

He soon began to preach, and at that time there was no circuit trap, but no journey was too long for our brother, and he soon took a foremost position in the district. Looking back on an experience of nearly forty years the writer never remembers hearing the deceased’s equal as an open-air camp-meeting preacher.

There was a directness, pathos, and force in his discourses that seldom failed to reach the hearts of the people, and some of his old time sermons are remembered until this day. According to his means the deceased was a generous supporter of the station first, and even while ill he had placed his class money in an envelope ready for his leader when he called.

The attendance at his funeral, conducted in our Whitehaven Church by the Rev. E. Simkin, the superintendent, attested the hold the deceased had on the affections of the people, while the church on the Sunday night, when a memorial service was held, was very largely attended. The Rev. E. Simkin gave an eloquent appreciation of the deceased’s life-work, which made a marked impression on the congregation.

His life and influence will live long in the hearts and affections of those who knew him, and our church in Whitehaven will be the poorer for the loss we have sustained. If Primitive Methodism is the poorer heaven is undoubtedly the richer, and the great loss we have sustained is his eternal gain. ’Tis but a little while and we shall meet him again.