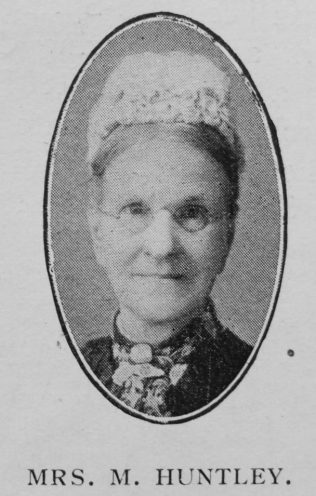 Transcription of obituary published in the Primitive Methodist Magazine by W.A. French

By the sudden death of Mrs. Huntley, wife of Mr. W. P. Huntley, The Hebburn Argyle Church lost one of its most liberal supporters and devoted members. Mrs. Huntley was born at Hebburn Colliery in 1841. In her childhood and youth she was closely associated with the Sunday School at that place; later she became mistress of the Church of England Day School, but on the termination of that engagement she became a member of the Hebburn Colliery Society, and her connection with Primitive Methodism has been without break from that time.

Mrs. Huntley has been a real mother in Israel, foremost in every good work. A leader who united and inspired others with her own spirit of enterprise and endeavour. She was a person of high intelligence, possessing the gift of expression at once clear, crisp and forceful. She won at once not admiration only, but love. In the home you saw her at her best, and the servants of God, whom she delighted to entertain, were made to feel at once the freedom and charm of home. The appreciation of her character and work found touching expression in the letters of sympathy to her husband and daughters.

The Rev. H. Pratt spoke of her as an affectionate wife, good mother and a kind Christian woman, whose interest in her Church never abated.

Rev. M.J. Pickering said: “I have kind remembrances of her; so cheery, so helpful, so interested in the Church and all good things.”

Rev. W. Duffield states: “She was the soul of motherly kindness, and most willingly toiled and sacrificed for the Church”; and Rev. E. Phillipson adds: “The memory of her life will be to her husband precious, and to her children a rich inheritance.” And many others wrote in the same appreciative manner.

Mary was born in early 1841 at Hebburn Colliery, Co. Durham, to parents Stephen Potts, a labourer (1841), and Jane Urwin.

Before her marriage Mary worked as a servant (1861).