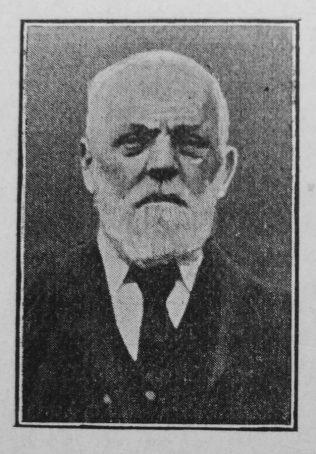 Bro. James Heap, of Crawshawbooth, in the Helmshore Circuit, departed this life February 25th, 1902, and on the first day of March was interred in the Wesleyan Churchyard.

He was born at Bacup, on September 18th, 1835. When he was only five years of age his home was broken up and the family became scattered. He would often tell how he was quite a big lad before he knew his own brothers and sisters. When he was fifteen years of age he went to Edenfield to live with his sister, Mrs. Blackburn. Here he came under Christian influences, for his sister did what she could to persuade him to give himself to God, and, happily, through her efforts and the earnest pleading of a devout Christian named William Butterfield, Brother Heap was brought to a “knowledge of the truth” in the Primitive Methodist Chapel, Irwell Yale, when he was about nineteen years of age. This change came to him as a great spiritual awakening, a light that no after trial could extinguish, as he held on his way amid storm and calm for fifty years, until his work was done and the Master bid him “Come up higher.”

When he was twenty-two years of age he married Helen Fedden and lived at Helmshore and neighbourhood until 1874, when she died leaving him with seven children. During his married life he had some strange and trying experiences. Many a time they went to bed, not knowing where the next morning’s breakfast would come from, but he always put his trust in God, and asked Him to open his way, and his prayers were answered. One morning a basket of provisions was left on the doorstep, and at other times help came in various ways, but in whatever way it was sent he always saw in it the hand of a loving Heavenly Father. He married again, his second wife being Ellen Newman, of Crawshawbooth (who now mourns her loss). Some of the older members at Helmshore testify to the sterling qualities of heart and life he ever manifested when he was with them.

From the day of his conversion unto the day of his death his trust in God has never wavered, and his Christian life has never faltered; indeed, his patient resignation in times of trial and sorrow has been the admiration of all who knew him. He was a member at Crawshawbooth for about thirty years, and a superintendent and teacher in the school for most of that time. As a class leader he was devoted to his work, taking a personal interest in all his members. He was also both by principle and practice a thorough temperance worker. Brother Heap, In recognition of his service in Sunday School, was appointed to the honourable position of President of the Rossendale Sunday School Union during their jubilee year.

In forming some estimate of Brother Heap’s character and work we recognise in him a deep sense of personal responsibility to God and duty to man. This quality is seen in all his life and work. A superintendent of the Sunday School, a trustee, a leader, a wise counsellor, his care and method are seen in all his work. In his daily employment during a period of thirty years, he was never known to be late. This method and punctuality he carried into all his religious work, patient, strong, plodding and kindly. “He stood in his lot to the end of his days.” Even then he was full of purposes and hopes. His class-book had come to the last page. He said to me ‘‘I will need another class-book but it will do when I come to quarter day.” Alas! “man proposes, God disposes,” before the quarter day the last page in the book of his earthly life had been written. Swiftly and unexpectedly the end came, but he was rerady, hopefully trusting In God.

On the day of his funeral the whole of Crawshawbooth showed in what respect and esteem our brother was held. A beautiful wreath of flowers was sent by the Church and Sunday School, another was sent by his employers, on which was inscribed the words, “In loving memory of a faithful servant after twenty-nine years of service.” Some of the young men of the school “bore him to his burial.” Many were present, friends, relatives, teachers, members of the Church, as well as his own large family were there in sympathy and sorrow to pay their last tribute to Christian worth. A short address was given by the Circuit minister. Mr. James Aspin and Mr. James Riley (who had known him for many years) also took part in the service.

May the sorrowing widow and family be comforted by the hope and consolation of the Gospel, and the whole Church gain inspiration and zeal from the example and memory of James Heap.

James married Ellen Fedden (abt 1839-1874) in the summer of 1858 in the Haslingden Registration District, Lancashire. Ellen had a daughter Hannah born in 1856. Census returns identify a further seven children.

In addition they raised a stepson, Robert Newman (b abt1865), and an adopted daughter, Clara Blackburn (b abt1884).