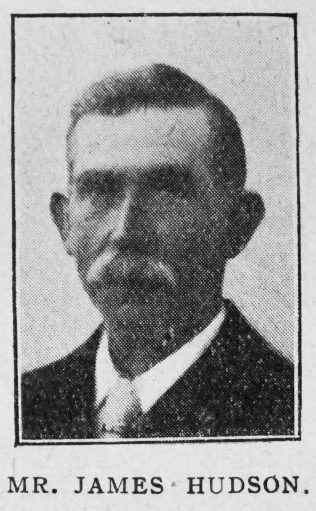 Transcription of a sketch in the Christian Messenger

It is with pleasure and appreciation that we write respecting the record of service of one of the local preachers of this circuit – Mr. James Hudson, who has completed fifty years’ work – in the latter part of 1919. He was converted at the age of thirteen, and has been connected with the same church (Laisterdyke) ever since (with the exception of six months, when he lived in Sheffield). At the end of 1868 he received his “note” for the plan.

Our brother kept a record of his work for forty years, and during that period he preached 933 times and travelled 3,380 miles. The last ten years he has not kept a record.

In addition to being a local Preacher, he has been a Sunday school teacher for forty-eight years, and a class-leader for forty-four years without a break.

He is a keen student to-day and has been all along. He loves books, but above all his Bible, which he knows intimately. He believes in most careful preparation for the pulpit, and his sermons evidence this. He believes in doing his part to the best of his ability, and then seeking and expecting the blessing and guidance of the Holy Spirit.

No one is more welcomed in our pulpits than Mr. James Hudson. He has always been in great demand as a preacher – and even now receives repeated and numerous calls for his services.

He is a brother beloved by all who know him for the genuineness of his character, the charm of his manner, his devotion to God, his unswerving loyalty to truth, and his self-sacrificing labours. Right through his service runs the red line of sacrifice.

Mammon-worship and self-seeking never allured him. He has ever preferred the joy of quiet, patient, plodding toil in His Master‘s Vineyard to the wealth of the world. The passion of his life has been to do good, to help others to the high and heroic life of godliness, and to give a word of comfort to the disconsolate and despairing. Those who know him best testify to his identity with Jesus Christ. His life is a living commentary of those sublime words:- “Abide in Me,” supported by the majestic clause “and I in you.” In this union of heart with heart, of life with life, is the secret of the complete unworldliness, the detachment from lower standards, the single-hearted service, and loyalty to Christ and His Church.

On Saturday, December 6th, 1919, the Bradford III. Circuit celebrated his Jubilee as a local preacher. A Public Tea was held, and after the tea a Public Meeting, a meeting that will not soon be forgotten. Many friends spoke of his years of faithful ministry in this and other circuits. Letters of congratulation and appreciation were received from former ministers and others who were associated with Mr. Hudson years ago.

Mr. W. Firth (Circuit Steward), on behalf of the Circuit, presented him with an illuminated address and a wallet of “notes” amounting to £25, as a token of the esteem in which he is held and appreciation of his services.

He is still on the watch-tower, he sees the drift of his time, he hears the voices challenging his loyalty, but he is serenely sure of the “inwardness” of the words: “Lo I am with you always, even unto the end.” We pray that he may be spared many years met.

In all his labours our brother has had a wise, willing and cheerful helper in his loving and devoted wife. We are sorry for her prolonged and painful illness. We pray God‘s richest blessing upon them and that Mrs. Hudson may be restored to normal health.

James was born on 1 February 1848 at Bradford, Yorkshire, to parents John and Martha. John was a wool comber. James was baptised on 5 March 1848.