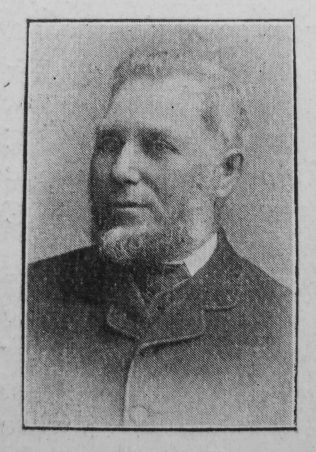 Transcription of Obituary in the Primitive Methodist Magazine by W.P.

Jarvis Hogg was born on September 28th, 1835, at Crosby, Lincolnshire. His parents soon afterwards removed to Burton-on-Stather, situate on the silvery Trent, and by the side of which classic stream the greater part of Mr. Hogg’s life was spent.

Four decades ago, he was converted to God at a Camp Meeting, held at Thealby, and thenceforth his life and labours were consecrated to the Master, whom he nobly served. Being possessed of preaching and pastoral powers, he was soon appointed Local Preacher and Class Leader, which offices he sustained to the honour of God and with acceptance to His people, till on June 30th, 1903, he suddenly put off mortality that he might be robed in white raiment.

Twice with exemplary tact he represented his Circuit in the District Synod; and was unanimously elected member of the Sheffield Conference in 1901. He was specially sympathetic with young life in its aspirations and exuberant energy, and filled the office of Sabbath School Superintendent for many years. He was an ardent Temperance worker, the interests of which cause he indefatigably promoted by tactful administrative conduct and cheerful service.

The Independent Order of Good Templars had in him a most worthy member, as evinced by his being elected “Deputy Grand Worthy Chief Templar” by the Autumn Rose District Lodge of Lincolnshire in 1876, and by his wise administration of affairs he so won the esteem and confidence of the lodge that he was unanimously re-elected to the distinguished position of Chief Templar, whose traditions and credit he most worthily maintained. Social Reform had in him an able exponent and worthy advocate; his zeal, though unquenchable, was ever tempered with sagacity, and while he was unbending in his principles, he ever distinguished between principle and sentiment, and applied his principles with gentleness of manner, but vigour of deed. In political matters he was vehemently true to what he conceived was equality for all, which he regarded as the birthright of mankind, and his righteous soul abhorred monopoly in any form, and he proved a stalwart champion of all emancipative measures. In church life he was held in highest esteem, because of his unimpeachable Christian character, his deepening interest in spiritual things, and his quiet and unobtrusive methods of work and worship.

He saw in life evidences of urgent spiritual needs, and, surcharged with the love of God and pulsing with deepening desire to alleviate them, out of the fulness of his heart he so spake that many weary souls under his ministry found sweetest rest. Was he in the class-room his glowing heart, radiant face, felicitous phraseology and mutual feeling rendered him a “son of consolation” to his fellow witnesses for God. If in the sick room his tender heart, gentle speech and optimistic mood made him specially ministrant to the weak and weary. In the home circle his conjugal love and paternal affection constituted him a model husband and father.

On July 3rd the clayey casket of the glorified saint was carried by devout men to its burial, in the Scatho Road Cemetery, Grimsby, being mourned by many kindred and friends amid profuse floral tokens of tenderest affections. The Rev. William Pigott, D.D., assisted by Mr. William  Cooper, conducted the funeral service in the Welholme Road Mission Church and at the grave, quitting which we said, “Oh! dust of miniature deity, sleep on till the Day break, and thy former spirit retenant thee, that thou may’st sweep through the gates of Glory and amid light ineffable dwell in eternal blessedness.”

Jarvis was baptised on 25 October 1835 at Frodingham, Lincolnshire. His parents were John, an agricultural labourer, and Elizabeth.

An 1882 Lincolnshire directory list Jarvis as a jobbing gardener.