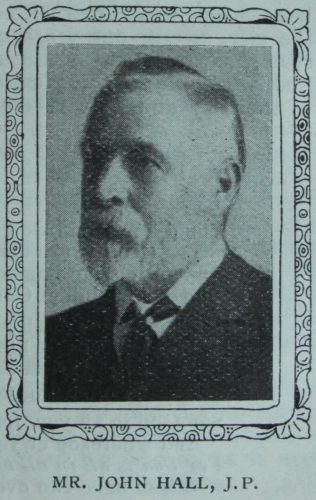 John Hall has been a member of our Church and local preacher for fifty-five years, for he had not been a member of the Church twelve months before he was called on to exercise his gifts and graces by proclaiming the Gospel of Jesus Christ to others. Born at Cannick, Lincoln, on June 1st, 1835, Mr. Hall was early led to yield himself to Christ through reading Rev. J.G. Pike’s “Persuasives to Early Piety,” a book which had been given to him as a reward from the Sunday school. Mr. Hall joined the village church of Little Hale, Donnington Circuit, and there commenced his prolonged service for Christ. On removing to Hull in 1856, Mr. Hall associated himself with Great Thornton Street society, and for fifty years has stood connected with our church in the city and been an able and indefatigable local preacher, frequently taking twelve or thirteen Sundays per quarter in the work he loves so well. Not merely has the city shared in his labours, but the Circuits around have frequently been visited by him. He is a careful student and a very acceptable speaker. Outside the pulpit, as well as in, Mr. Hall has rendered fine service to the cause of Jesus Christ. For twenty-five years he has been closely associated with the public life of the city, twenty-one years as city councillor, several years he was on the old School Board and is now on the “Educational Committee” of the city, and only recently tardy recognition of his work has been given by his appointment to the magistracy of the city. Some men are spoiled by prosperity: Mr. Hall is not. He fills his seat in the class meeting just as regularly as his seat on the magistrates’ bench, and though he is beyond the age of threescore years and ten, he still delights to tell “the old, old story of Jesus and his love.”