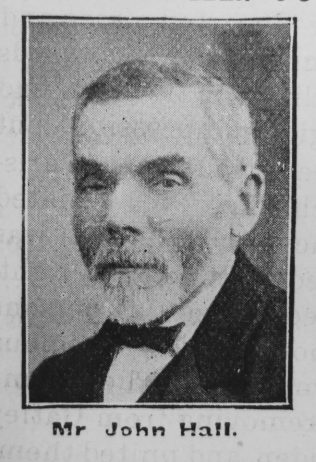 Transcription of Obituary in the Primitive Methodist Magazine by A.B.

Primitive Methodists in the Shipley circuit will cherish for many long years, the memory of Mr. John Hall, who fell asleep in Jesus on the morning of July 24th, 1902, at the age of 77 years. He came to his grave like a shock of corn fully ripe. He was a life-long member of the Connexion, and held official positions for more than fifty years, being converted when a boy of ten, at Addingham, a village near Silsden. The very first Sunday the Silsden leaders sang and preached in the village streets, John Hall followed them from morning until evening, and at night found Christ. He at once attached himself to the Church, and two years later was received into membership. There were many inducements to join another communion in the village, but the brave boy, having made his choice, clung to his first love. Mr. Hall came to reside at Shipley in 1851, and for fourteen years served the Shipley society as member and school superintendent. Removing to another part of the town, he associated himself with the Windhill society then meeting in a room in School Street, and for thirty-seven years served the Church as class leader and school superintendent, making an unbroken record of fifty years superintendency in the two schools of the town.

In recognition of his services as school official, the teachers and friends of the Windhill society presented Mr. Hall with a framed portrait of himself at a magnificent meeting held in his honour on May 10th, 1902, at which many of his old associates were present, and spoke. Among others who subscribed was Dr. Joseph Wright, M.A., Ph.D., successor to the late Dr. Max Müller in the chair of philology, Oxford University. When Dr. Wright, as a boy, attended the Windhill school, Mr. Hall was in the full strength of his Christian service. Many years afterwards, when Dr. Wright had become famous, the (now) Professor never visited Windhill without calling to see his old superintendent, a friendliness Mr. Hall heartily reciprocated.

Mr. Hall never forgot the sad and bitter deprivations of his early life, and, in after years, when a comparatively successful man, he was to many “a help in time of need.” It is no exaggeration to say that his chief interest in life was “the kingdom of God,” and everything was made to square with this first claim. When the daring proposal was made to build the present chapel – erected in 1887 – Mr. Hall at once set himself the task of “seeing the thing through,” and during the process of building often collected the money during the week, to pay the workmen’s wages on the Saturday: indeed the circumstances associated with this erection are more like romance than fact. Many brave men were “in labours more abundant,” but all gladly concede that the magnificent building is a monument to his industry, courage and faith.

At the Conference held at Leeds, in 1898, he was made a member of the Deed Poll, and attended to the duties of that appointment to within a few weeks of his passing away. His end came like a beautiful sunset, calm and glorious. His day’s work being done, he quietly fell asleep in the presence of his wife, his four sons (the eldest of whom is senior circuit steward), and one daughter. He passed away in the hope of an unbroken re-union, for they are all associated with us. Devout men carried him to his burial on Saturday, July 24th. The vicar of Windhill parish offered prayer in the house, and attended the service in the Windhill chapel, in which service the circuit ministers, Revs. Albert Bage and John Morrison, officiated, assisted by Revs. H. Cooke and J. Goldthorpe. Addresses were given by Rev. T. Newell (on behalf of General Committee), and Rev. G.H. Beeley.

John was baptised on 2 October 1825 at Addingham, Yorkshire. His parents were Thomas, a weaver, and Hannah.