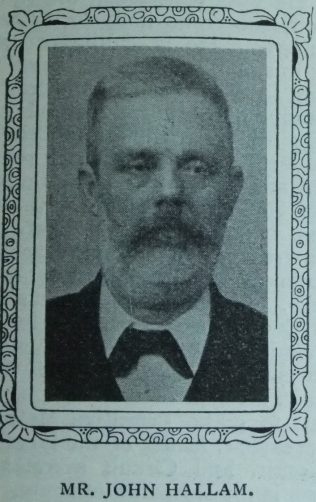 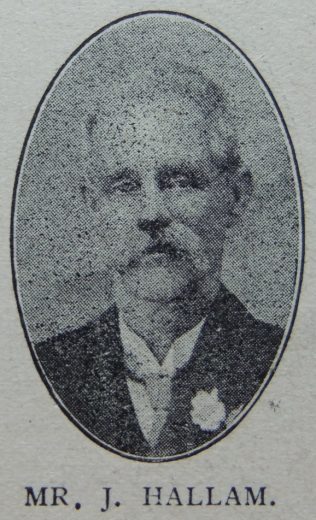 John Hallam, local preacher of Nottingham Third Circuit, was born at Sawley, Derbyshire, March 3rd, 1850, which place has been rendered famous as the birthplace of the great Free Church leader, Dr. Clifford. Mr. Hallam was sent very early in life to a Church of England Sunday school, and displayed a thoughtful turn of mid and a good knowledge of the Scriptures. He was converted when he was about twenty-one years of age, under the late Mr. W. Clay, of Long Eaton, and manifesting the gifts and graces necessary for a local preacher, the authorities of the Derby First Circuit put him on the plan. He laboured with great acceptability and success in that station until he removed to New Basford, in Nottingham Third Circuit, in 1884.

Mr. Hallam is one of the “old school,” evangelical in doctrine and expression. He knows his Bible well, believes the message with all his heart, and delivers it with great simplicity and fervour. He has read a considerable number of theological and other books with a view to help him in his work, but has made a careful and prayerful study of the Word of God.

Mr. Hallam is also a class leader of conspicuous ability and aptitude. He is very devoted to his work. He is powerful in prayer, unassuming in manner, has no special desire for official position, but whatever he is called upon by the Church to perform he does it with a willing mind and an earnest heart.

John was born on 3 March 1850 at Sawley, Derbyshire, to parents Thomas and Mary. Thomas worked the land.

John worked as a lace maker.

John also served as a trustee and society steward. His obituary records that he was a member of the District Committee for many years.

John married Mary Wass (b abt1863) in late 1890 at Basford, Nottinghamshire. Census returns identify one child.