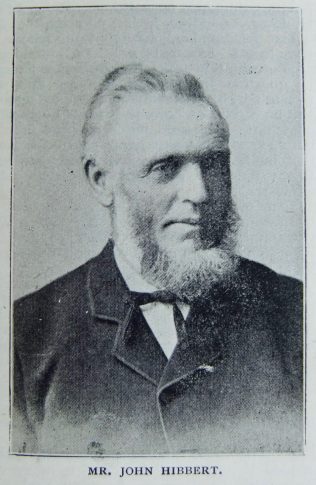 Transcription of Sketch in the Christian Messenger by Albert Walliker

“JOHN HIBBERT” has been a faithful local preacher of our Church for nearly forty-five years. This fact alone entitles him to honourable mention in our gallery. Speaking of his early advantages, or, rather, let us say disadvantages, he says: “I began preaching too soon, and am sadly unfit for that holy work yet.” This, however, is but the natural modesty and humility of our friend, finding expression in a lowly estimate of his own powers. Those who know him best think far otherwise.

Mr. Hibbert was born in Monyash on December 25th, 1834, and as he put it the other day, while the singers were going their round.

His parents were extremely poor but strictly honest people. “Often,” he says, “my mother and I have eaten dry oat cake for the purpose of escaping debt.”

Like most lads in those early days he received little schooling, having to begin work as soon as he was able, stern necessity making it imperative.

Mr. Hibbert’s father and mother attended the Established Church when they went to any place of worship, but knew nothing, he tells us, of conversion, so that he received no religious training at their hands, nor had he the inestimable advantage of a Christian home. Yet from his earliest days he was spoken to by the tender Spirit of God, and remembers very distinctly sitting before the fire, as a very little boy, reading and earnestly wishing that he could be good.

It was not until he was twenty-three years of age that the great change, so aptly described as conversion, took place. He was working temporarily at Warslow, a village connected with our Leek Circuit, and while here the young man Hibbert was converted at a watch-night service, conducted by our own people. He at once joined our society at Monyash, and has remained a consistent and active member of our church from that day until this.

In conversation with him about those early days he said: “I was very ignorant of the plan of salvation. Sometimes I felt I was right, sometimes I doubted, and at other times I almost despaired.” But Mr. Walter Wood, long deceased, who was at that time a Primitive Methodist local preacher, also a brother of the late Rev. J. Wood, D.D., and living at Whim Farm, Monyash – the scene of the early days of the sainted Dr. and the other members of the Wood family – threw open his library for the use of his friend Hibbert. He was much helped by reading Wesley‘s Sermons, especially the one on “Justification by faith.” This brought him much needed light while communion with God, fellowship with Christian people, the reading of good books, a knowledge of his own shortcomings and imperfections, led him to seek a fuller and more definite experience of God – spoken of at that time as the “blessing of entire sanctification.”

He was, he says, in these days, “much given to impulsiveness – a hasty temper was my besetment.” After such outbursts he was strongly tempted to doubt the reality of his change. Once the temptation to doubt the genuineness of his conversion was so strong, and his agony in consequence so great, that “ he thought he would be compelled to leave his work and go home for prayer.“

In June, 1861, he went to work for his friend, “Walter Wood,” Mr. Wood’s “servant man ” having left, for some reason, very suddenly. He recalls the time “as if it were but yesterday” how he and his master used to speak together of their present Christian life and attainments, how far removed their life seemed from what God willed it to be, and how there and then they determined to seek the blessing of entire sanctification. At once they kneel down under a wall, “bowed down by some mighty influence,” and earnestly sought liberty from the guilt and power of sin through the energy of the sanctifying Spirit of God. They continued their seeking until the end of that year; and they prayed anywhere and everywhere when opportunity afforded.

Two or three times they walked from Monyash to Chelmorton to seek counsel of a Christian lady living at the latter place, and known in the neighbourhood as the blind Miss Morten, now deceased, who is still the friend for Africa, – £5, in every missionary report, records the yearly contributions for Chelmorton to the African Missionary Fund. Although physically blind, Miss Morten possessed piercing spiritual vision, and was learned in the deep things of God. She prayed with then and counselled them to “believe.”

Towards the end of the year, 1861, “special meetings” were being conducted at Flagg, a village two miles from Monyash. Mr. Hibbert and Mr. Wood had agreed to meet there on the Saturday night. Mr. Hibbert arrived first. When Mr. Wood entered the Chapel, Mr. Hibbert says, “I saw at once he had received the ‘blessing.’ His countenance was transfigured, and a light that never was on sea or land shone in his eye.” Mr. Hibbert returned home from this meeting determined to obtain that night the blessing he had sought so earnestly and so long.

When at prayer in the quietness of his own chamber the three passages of Scripture most present to his mind were – “If thou canst believe all things are possible to him that believeth”; “Whatsoever ye desire, when ye pray, believe that ye receive them and ye shall have them”; “But if we walk in the light as He is in the light, we have fellowship one with another, and the blood of Jesus Christ His Son cleanseth us from all sin.” “And,” said Mr. Hibbert, “I believed that I received, but the assurance was delayed.” “The Lord, “said my friend to me the other day, “seemed to be at great pains to teach me that the blessing was through faith.”

Before the assurance came he wrote to his sister, then as now living at Bakewell, and who was similarly exercised in mind and heart, telling her that he had received the “blessing” he had sought so long. “The devil,” he says, “made a handle of this, and tried to persuade me that I had told a lie, and in consequence would go to hell. Then,” said our friend, “if I go to hell I’ll believe that the blood of Jesus Christ His Son cleanseth me from all sin.” The assurance came, however, in the course of a few days, when at the close of the day, as his Custom was, he sat reading the Word of God with meditation and with application to his own heart, a marvellous manifestation of God was granted to him as he read – “And Jesus, being full of the Holy Ghost, etc.” He says; “I nearly fell off my chair, so great was the power of God resting upon me”; and since that day Mr. Hibbert assures me that he has never had a doubt or a fear of his acceptance with God.

His conversion and changed life were the means under God of leading his mother and sister into the light. His mother was stricken with a sense of sin when she was 50 years of age. She was climbing a stile which led from the path into the garden, when the thought seized her – “50 years old and a sinner yet.” This was the first step, and in a short time, after much concern of soul, she humbled herself as a little child and was found worthy, in Christ, to enter the eternal Kingdom of God.

As a preacher Mr. J. Hibbert is serious, earnest, thoughtful, Scriptural, and greatly appreciated. His texts come to him while reading, thinking, or working. He could not sit down, as, indeed, he has no need, “to find a text for Sunday,” like some of whom we have heard. His texts are “suggested,” and after meditation upon the particular passage In question he is able to see his way through it, he writes just a few lines upon it. But he rigidly eschews the use of notes when preaching. He used notes once he tells us, but such was his experience on that occasion that he has never repeated the experiment. It was the most miserable time he ever had while preaching.

Some of his favourite texts are as follows, “ Offer unto God thanksgiving, and pay thy vows unto the Lord ”; “Seek ye first the Kingdom of God and His righteousness and all these things shall be added unto you”; “He that taketh warning shall deliver his soul.”

As a sample of his homiletical skill take the following. The subject is—“The altar and its uses.” The text is—“The fire shall ever be burning upon the altar: it shall never go out.”
1. It was a place where the people brought their offerings.
2. It was a place of safety.
3. Jesus Christ is our Altar. We should bring our offering to Him. There is safety in Him.
4. The Lord kindled the fire, the priests tended it night and day, and it never went out until the Temple was destroyed. The Lord kindles the fire of His life on the altar of our hearts. We must see to it that it is never extinguished. God intends it never to die down. Watchfulness, faith, holy living,  keep it burning.
That, with all its defects, is not a bad outline for a man who has had but little schooling, and no training whatever in the science of homiletics.

For over 40 years Mr. Hibbert has been a total abstainer and a non-smoker. For his convictions and practices in these particulars he has endured much ridicule and scorn. But “John Hibbert” is not a man to be frightened out of a course he believes to be right.

Industry and thrift, coupled with modest living, have placed him in comfortable circumstances. He is able, therefore, and does give willingly and liberally of his substance to the Lord, and when he is translated our church at Monyash will be considerably the poorer in more than one respect. Our hope is that he may be spared to the village society for many years to come, although he will be quite ready when the Master comes, and will meet the King in His beauty without fear. Yet when “John Hibbert” goes home he will be missed, and we know of no one who is able to take his place. Consecrated and self-denying in service, meek and lowly in heart, sweet and condescending in disposition, pure and charitable in thought, patient in his endurance of reproach, fearless in his advocacy of the truth, a man of faith and of the Holy Ghost, his niche will not be easily filled, for of his like there are all too few in our day. May his mantle fall on the day of his departure upon another is the prayer of ALBERT WALLIKER.

John was baptised on 8 February 1835 at Monyash, Derbyshire. His parents were William, a lead miner, and Hannah.

John married Ann Bunting (1857-1920) in the spring of 1889 at Monyash, Derbyshire. Census returns identify one of two children.