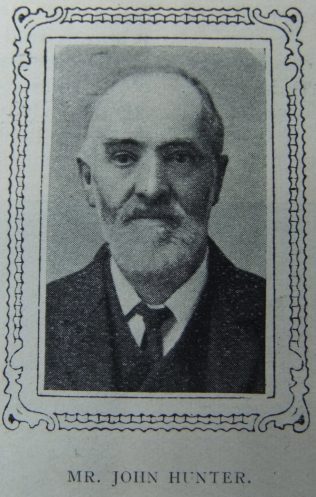 MR. JOHN HUNTER has for many years past been in the front-rank of official life of the Whitby Street Church, which is the mother-church of the West Hartlepool Circuit. He has been connected with the Church for more than forty-four years; and for more than twenty years he filled the office of Society Steward; and for many years the offices of School Treasurer, Trust Secretary, and Class leader. He has found the chief joy of his life in the service of the Church, and during the many years of his official life he has given his best and his most to its service. Few persons have rendered more valuable service to a Church, than has been rendered to Whitby Street Church by Mr. John Hunter, and his excellent wife.

His state of health has now necessitated the slackening somewhat of the strain of service, and last quarter he asked to be relieved of the duties of Society Steward, and also of the School Treasurership. Both the Leaders Meeting and the Quarterly Meeting passed resolutions of regret and appreciation, such as any man might be proud to possess. The Leaders Meeting further decided that such a term of exceptional service could not be allowed to close without some tangible acknowledgement, and resolved accordingly.

We cannot but associate Mrs. Hunter, here, with her husband, for she has been equally devoted to the interests of the Church. Besides be active in all the branches of Church work, and exceptionally active as a temperance worker, she has during the long term of twenty years filled the post of Orphanage Collector, and has collected an average of over £12 annually. They have won a warm place in the hearts of many who have known their worth.

The subject of this sketch was probably John Hunter baptised on 23 October 1842 at Pickering, Yorkshire. His parents were John, a labourer, and Rachel.

John worked as a grocer whilst living in West Hartlepool, Co. Durham.