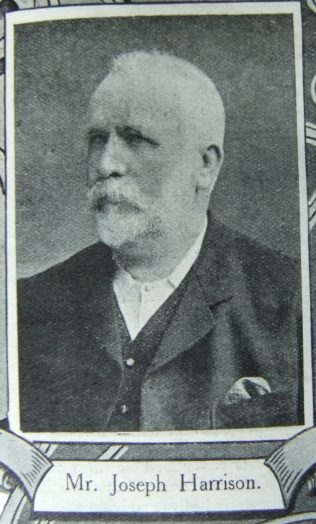 Mr. Joseph Harrison, of Esk Winning, who since the preparation of this sketch has passed away, was a typical Yorkshireman, who resided for nearly 50 years in the County of Durham. The Waterhouses Station owes much of its prosperity to his sagacity and statesmanship. For 45 years he was a worker among young people, and was latterly the Sunday School Superintendent. Always a lover of music, he was a member of the choir. He was a local preacher for 37 years. Deeply interested in Connexional affairs, he attended several Conferences as delegate or visitor. By his shrewd business ability, forceful individuality, wide acquaintance with social and political questions, and the cultivation of his gifts as a speaker he became one of the most conspicuous figures in the public life of the district. “A soul of noble integrity,” he was beloved and trusted by all.

Joseph was born in 1846 at Grinton, Yorkshire, to parents Richard and Rachel. Richard was a tailor. Joseph was baptised on 21 February 1847 at Grinton.

Joseph started his working life as a coal miner, but soon began to follow his father’s profession as a tailor and draper.