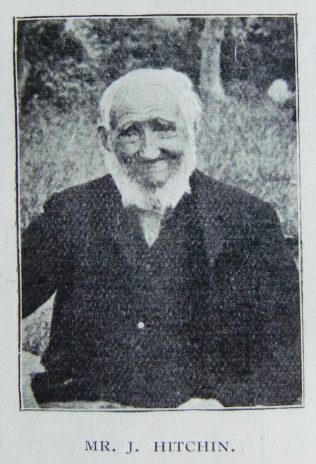 On Saturday, March 21st, 1903, there passed away the oldest official and member of the Tarporley Circuit. Born at Bunbury in the year 1818, in early years he removed to Eaton, and in that neighbourhood nearly the whole of his long life was spent. For over forty years he was employed upon one farm in that village. In his early manhood he gave himself to Jesus Christ and identified himself with the church at Eaton, and with that church he remained associated until the day of his death.

One of his companions of those early days was the late Rev. Miles Dickinson, who was a member of the same church. His gifts and graces were soon recognised, and, after taking appointments with other brethren, the Quarterly Meeting of the old Burland Circuit (which then included what are now Nantwich and Burland, Whitchurch, Crewe, Winsford and Tarporley Circuits) in March, 1844, sanctioned his name appearing on the plan as an exhortor. His first number on the plan (still preserved) was 100, and his first planned appointment was at Beeston, on April 14th, 1844.

He was possessed of gifts of no mean order, and was in great demand in the pulpits of the neighbourhood; not only those of his own church, but of the other Nonconformist churches being always open to him.

Indeed, considering his scant opportunity for preparation, and his small educational advantages, it was wonderful that he was able to accomplish the work he did.

In the discharge of his duties as a local preacher he had tramped thousands of miles, and preached hundreds of sermons. As a class leader he was held in high esteem by his members, and they still cherish precious memories of the happy seasons they have spent with him. He was an enthusiastic supporter of foreign missions, and was, often to be found upon the platform advocating their cause, whilst he gave to the utmost of his ability in their support.

It is to men of the stamp of Bro. Hitchin that we owe much of our success in the villages of the land. Men, who after a hard day’s toil, can find time for the service of the sanctuary, who out of a day-labourer’s pay loyally support the church, and who ever put God’s work first, and their own case and comfort in the background. For the last few years he had only been able to take an occasional appointment. His last public appearance was at the Circuit gathering of 1901. But the old spirit was strong within him. It was his great delight to speak about the old preachers with whom he had been personally acquainted, and to tell of their abundant labours and great successes. He took a deep interest in the affairs of the Circuit, one of his first questions when visited by his brethren being, “How is the work prospering?” Ever and anon he would mention some text of Scripture which had been engaging his attention, and would indicate the lines upon which he would have preached from it had he been physically able. Very gradually the end came. There was no organic disease. He was mercifully preserved from pain. The outer man decayed day by day. A fortnight before his death he had a slight attack of bronchitis. A stronger person would have shaken it off, but he was too weak to battle with it, and so, as far as this world is concerned, he ceased to live, in the 85th year of his age, having filled the position of a local preacher for 59 years.

He had lived a strenuous life, in labours he had been abundant. The one great theme of his preaching had been “Christ and Him crucified.” In the days of his weakness and loneness that Christ was his one solace and hope. Some verse or other of his favourite hymn was often upon his lips.
“Now I have found the ground wherein
Sure my soul’s anchor may remain;
The wounds of Jesus, for my sin
Before the world’s foundation slain.”

On March 24th, after a short service in the home conducted by the Circuit Minister, all that was mortal of the good old man was laid to rest in the Tarporley churchyard. The coffin was borne to the grave by four local preachers.
“Soldier of Christ, well done!
Cruise be thy new employ;
And while eternal ages run,
Rest in thy Saviour’s joy.”

Joseph was baptised on 21 June 1818 at Bunbury. His parents were John and Mary.