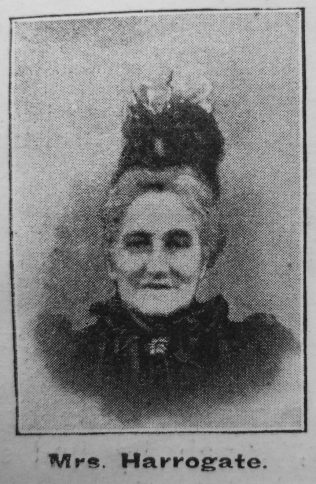 Transcription of Obituary in the Primitive Methodist Magazine by A Latimer

Mary Ann, the devoted and beloved wife of Joseph Harrogate, reached the limit of her suffering, which through several years she had so patiently borne, and entered the home of eternal rest 5th July, 1902. Hers was a life in which the guiding hand of God was clearly seen, and her death was a response to the welcome voice of His love.

Her maiden name was Urwin. She was born at Hartlepool, 24th March, 1846. In her childhood she was bereft of father and mother. Her aunt, Mrs. Roxby, of Moorhouse, Hartlepool, made this orphan child a home. When about 15 years of age she was apprenticed to another aunt, Mrs. Wilson, who had an extensive millinery business at Hartlepool. By this apprenticeship, and the business she learnt, she was fitted to render eminent service in after life in connection with bazaars and sales of work on behalf of chapel funds. At the age of 29 years she was married to our dear friend Joseph Harrogate, became the real partner of his life, and, by her tender and unfailing affection, the light and joy of his home. No woman could be more devoted to her husband, and none could be more motherly than she. Most exemplary in her own home life, she was keenly solicitous for the good of those of whom she took charge. The first two years of their married life were spent at North Shields, where they were associated with the Saville Street Church and won the esteem of many. Thence they removed to Middlesbro’, and became members of the Gilkes Street Church. Here Mrs. Harrogate, in connection with her husband, rendered invaluable service. The present chapel was then built, and a small society of seventy members had to bear a debt of £3,000. Mr. Harrogate was treasurer, and thus had the anxiety of raising the interest and meeting financial demands. The ladies here, as in many other places, were the salvation of the trustees. With all her characteristic energy and flow of spirit and kindness, Mrs. Harrogate entered into the work. The responsibility was great, but magnificent success was realised. About 21 years ago they removed to Newcastle-on-Tyne and united with the Maple Street Church. The funds of this chapel, of which Mr. Harrogate was one of the first trustees, at once received their attention, and the spiritual prosperity of the church became their prayer and joy.

From her childhood Mrs. Harrogate loved her Saviour and delighted in His work. While a scholar in the Hartlepool Sunday School her heart yielded to the sweet drawings of His love. She became a member of Mr. J.V. Longstaff’s class, in which she continued while resident there. For several years she was connected with the choir and helped in the service of praise.

Spiritual life, the highest possession of a young heart, was hers, and her character was lovely in the richest beauties of grace. Her conversation, her aspirations, and her pleasures were distinct from and superior to those of the world. Religious society was clear to her, and her hand was ever ready for religious work. Without any parade or lofty profession, she, as by a sublime instinct, recoiled from what would have created an unhealthy atmosphere of soul, and what would have deprived her of the joyous consciousness of Divine love.

Her natural temperament was sprightly and cheerful, and thus she was disposed to look on the bright side of things. She could see the gladsome sunbeam when others were encircled by cloud and chilled by fog. This disposition made her an invaluable companion and friend, gave sweetness to her presence, and was a great strength to her in the long and painful afflictions she was called to bear.

Her Christian charity was very marked. Her heart prompted her to look on the truer and better features in other lives, to excuse faults, to speak kindly, and to hold a favourable estimate wherever possible.

Her visits to the homes of affliction, and and her gentle soothing words, were a great comfort to the suffering and sad. We cannot forget her kindness, her fine sympathy, and her sorrow, in a day of deep darkness and trouble that passed over our own home.

The ministers of those stations where she lived, held her in high esteem. Letters expressive of their appreciation of her character, and conveying condolence to the bereft, were written to Mr. Harrogate at the time of her death.

The sad and painful affliction which brought her steps down to the gates of death was borne in a most exemplary resignation to the will of God. In Him she ever trusted. Conscious of his love she in love rested. For the end she was by grace fully prepared. She had heard death’s footsteps from afar, but ever drawing nearer, and in the strength and joy of faith, she met him as a vanquished foe.

The interment, in Eiswick cemetery, on Tuesdav, 8th July, was largely attended. The Revs. H. Pratt, G. Armstrong, J.H. Taylor, M.A., and A. Latimer were present and took part. At a later date a very fine memorial service, conducted by the Rev. H. Pratt, was held in Maple Street Chapel. The Rev. A. Latimer preached and gave an account of the life of our departed friend. The excellent choir, under Mr. J. Longstaff, contributed greatly to the effectiveness of the service. Several choice hymns were sweetly sung, and that beautiful anthem – “Crossing the bar,” – was rendered with superior taste and tender pathos. May the prayer of that anthem be answered in the experience of us all.

She married Joseph Harrogate (1844-1931) in the spring of 1875 at Hartlepool, Co. Durham. Joseph was an advertising agent for a newspaper. He had two children by a previous marriage to Hannah Armstong.