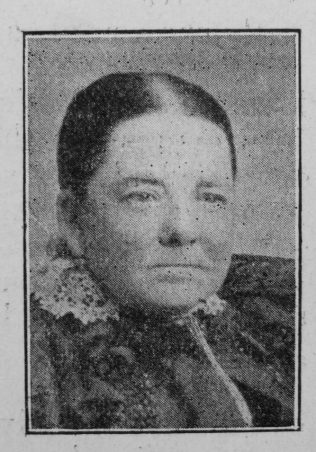 Transcription of Obituary in the Primitive Methodist Magazine by F. Smith

Our dear sister, the beloved wife of Mr. George Hornby, of Joseph Street Church, Leeds Fourth, is still a friend of Christ – and, of a considerable number of His best friends in two worlds. Her life opened at Tadcaster in 1845, was one of the first scholars in our school opened by the sainted mother of our late heroic missionary, the Rev. W.B. Luddington. Trained as His lamb she early became a sheep of His fold.

In 1866 she was married to Mr. George Hornby, one of our most energetic, useful and much respected officials in Joseph Street Church. She made him a neat and happy home, a model wife and did him all sorts of good as long as she lived.

But she was a woman whom Jesus thought a lot of, and was beloved and is yet by many of His best friends. It was her meat and drink to serve the heirs of salvation and their King.

She was indeed a succourer of many, as all her ministerial acquaintances testify, especially the young ministers to whom she was a mother beloved.

As a friend she was as true as steel, – no reserve, but fullest frankness and sympathy – promptly rendering every assistance possible. It purifies and ennobles others to be like her, writing the golden rule large in deeds of kindness.

To the Church she was as a woman of ten talents – worth indeed to it more than her weight in gold, she was a leading inspiration and example in Church work. She was skilful, inventive, practical. Herculean tasks confronted her and her co-workers. Her splendid will trampled upon word can’t.

Mountains could be, and must be, and should be, and were reduced to plains. Beaten, God’s cause must not be. Her tactful capacity and faith in God “laughed at the impossibilities (I have seen her do it) and cried they shall be done.” And they were done.

Ministers trusted her, were proud of her, and will ever be grateful to her for her practical sympathy in family afflictions and bereavements, as to the writer and Revs. G. Newman and S.B. Reynolds and others. Mr. Newman has written, also Rev. W. Tingle, large-hearted appreciations of her character and work. Doubtless she is reaping abundantly now, for abundantly she sowed, and fainted not here.

Joseph Street Church branch institutions all testified by resolutions expressing their profound appreciation of her invaluable services, and offering sincere and deep sympathy to her sorrowing husband.

Just a week before her departure I found her not merely submitting to God’s will, but acquiescing in it. To her God’s will was good will.

Fogs of doubt o’er-hung not the river. Her evidence was clear for going home to glory. She repeated with comfort and joy:
“Over the river faces I see,
Fair as the morning looking for me,
Free from their sorrow, grief and despair,
Waiting and watching, patiently there.”

She has met them, bless the Lord, O my soul. Yes, some of mine and of others. Large and beneficial services were held in Joseph Street Church and Cemetery, where many ministers and others laid her remains to rest till the great Easter Morning light the skies.

She married George Hornby (1845-1905), a pattern maker, in the summer of 1866 at Tadcaster, Yorkshire. No children are identified in census returns.