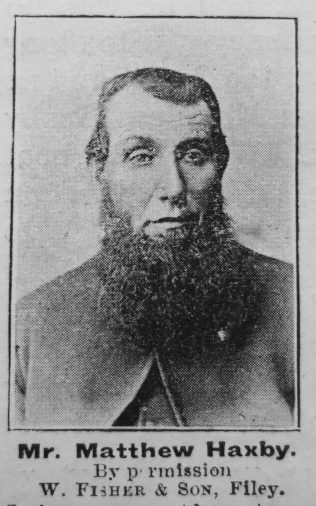 On May 31st, 1902, Matthew Haxby went “sweeping through the Gates, washed in the blood of the Lamb” He had “walked with God” for many years, and now God took him to the higher and more exalted service of Heaven. He was a Filey fisherman, and one of the finest types of a fisherman the town has ever known. He was the soul of honour, and lived a life of uncompromising integrity. He was one of Nature’s gentlemen, one of God’s true nobility. He has been a real “Great Heart” in the Primitive Methodist Church at Filey. The stalwartness of his physique in some measure represented the majesty of his soul. The Filey people associate Matthew Haxby with everything that was good and great. His life in the home, in the town, and on the boat, had a benign and salutary influence on all who were near to him. He was a most loyal “Primitive Methodist,” and what is known in popular phrase as “a Ministers Friend.” Whenever there was a difficult case in the quarterly meeting, he always stood by the minister, and the minister could always rely on the support of Matthew Haxby. He was 67 years of age when he fell asleep in Jesus, and 51 years of that good and noble life had been spent in the service of God. He was converted in his brother Jenkinson’s  class meeting, and a marked change took place in his moral and spiritual nature. He began to make himself useful in many ways. He sang, he prayed, and exhorted the people to turn to the Lord. He always had a passion for singing, and he was the leading singer in our Filey Church for 40 years. He loved the old tunes; the tunes with body and soul in them. He was mighty in prayer. He never neglected to pray in the prayer meetings.

The Rev. George Shaw assures me that he has seen the face of Matthew Haxby shine while he has been pleading with God. He got so near to Heaven that his face reflected the heavenly brightness. He was a class leader, and did his best to build up the people in their most holy faith. He became a local preacher in the year 1856, and he was no butterfly preacher. No journey was too long – no day too wet – no night too dark – and no congregation too small for Matthew Haxby to fulfil his appointment. When his boat was late in getting ashore, he has walked on the Sunday morning, from Scarborough to Filey, a distance of eight miles; and then from Filey to Staxton and back, sixteen more miles, to preach “the glorious Gospel of the blessed God.” And the people remember his clear, intelligent, plain and earnest sermons. And everywhere this name is as “ointment poured forth.”

He and his brother Jenkinson went out on mission work, and they were known as the “Filey Fishermen.” Their sphere of service has been wide, and their work has brought the “Filey Fishermen” into prominence. Their simple, hearty singing, and brief and spiritual addresses, charmed the large audiences which came together to hear them. Great numbers were converted through their labours, and several of the converts have entered the ministry.

During his long and trying affliction he gave himself to prayer. We have often seen him raise his face to heaven and repeat the words “My Lord, my God.” He breathed the breath of prayer. He wanted to go home to heaven and to God. His end was peace. “He rests from his labours, and his works follow him.”

Matthew was baptised on 15 September 1834 at Filey, Yorkshire. His parents were Richard, a fisherman, and Elizabeth.

He married Jane Crawford (abt1834-1905) in the summer of 1857 at Filey, Yorkshire. Census returns identify five children.