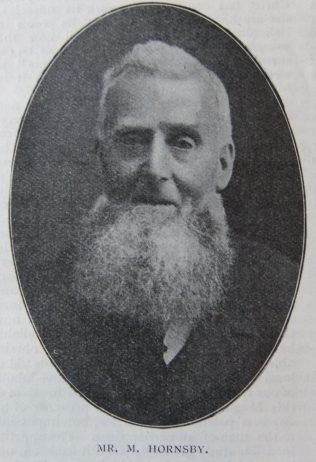 In the subject of this sketch the Connexion has one of its most worthy and devoted sons. He is an additional proof – if proof were needed – of the fact that much of the best life of our Church has emerged from the village.

The village in question – Ingleton – lies on the high road, about midway between Darlington and Barnard Castle, and is in close proximity to the extensive and beautiful estates of Raby Castle.

In this village Mr. Hornsby was born on the longest day of the year – June 21st, 1838. Ingleton is in the St. Helen’s Auckland Circuit, and, though the society has never been a very vigorous one, it has, in a quiet way exercised a real influence for good in the neighbourhood. In the directing of the early life of Mr. Hornsby it played an important part.

“Heaven,” it is said, “lies about us in our infancy,” and heaven came near his life, when young, in the influences of such gracious lives as Mrs. Margaret Raine and Mr. William Young, both stalwarts in the Christian faith and practice. The former, was no mere “passive resister ” when the rights of her Church were challenged.

The village school-room, in which our society in its early history, worshipped, was also used by the Church of England, and each had its own key. The parish clergyman, getting possession of both keys, refused our society admission. Straightway Mrs. Raine an “active resister,” and, at the risk of exciting the clergyman’s ire, effected a forcible entrance into the building.The clergyman, having previously granted her a loan of £20, demanded, in his defeat, its immediate repayment. This repayment Mrs. Raine was able to make, for quite in an unexpected way, a gentleman dropped into her shop and asked her if she had any use for a twenty-pound note. Mrs. Raine admitted that she had, and the use she made of it was to repay the loan in question. Verily, “our extremity is God’s opportunity.”

Mr. William Young was a popular local preacher, and one of the founders of the St. Helen’s Auckland Circuit. He became greatly interested in young Hornsby, and used to take him with him to his preaching appointments when he was quite a boy.

Usually, Mr. Young rode a pony, and he got a small pannier attached to the saddle for his little friend; and when the pony put on speed, the veteran would cry to his juvenile colleague, “ Hold fast, my lad; cling to my coat.”

An early experience in the life of our subject – an experience which made a deep impression upon his life – was that of being brought into personal contact with William Clowes, who prayed that “God might bless the lad.”

In 1862 Mr. Hornsby married and removed to Gainford, a village in which there was no Primitive Methodist society, so that it was not till after his removal to Saltburn that he became publicly identified with our Church. Losing his mother in January, 1872, he was deeply moved, and surrendered himself fully to God.

The addition of so alert, wideawake, and aggressive a personality gave quite an impetus to our Saltburn society and to the whole Guisbrough Circuit.

Becoming a local preacher after the lapse of a few months, he was soon in great demand for school anniversaries and other special occasions.

With a modest manner, an earnest, flowing delivery, a splendid energy, and a fine sensitive temperament, his Scriptural and practical discourses were made very effective, and hecame channels of much spiritual blessing.

Then, not only as a local preacher, but In the Sunday school, and in a variety of other spheres, he has ever delighted to toil for the Master.

Into each of these services he threw himself with a whole-hearted energy, and that despite the strenuousness of his every-day life, the fact that his business duties demanded his attention by six o’clock on the Monday morning, and that it was not until eleven o’clock on the Saturday evening that he was freed from them.

When a boy he had a missionary-box, and has all his life been greatly interested in missionary work. In his own district he is well known as a thorough-going missionary enthusiast. Besides his regular and substantial contributions to the Missionary Fund, he has more than once given a “Missionary Breakfast” for the Darlington and Stockton District.

The foreign missionary is one of his heroes, and there are but few of our returned missionaries that he has not had the pleasure of entertaining in his home.

His large-hearted generosity has found a variety of outlets, and many of them have been very unobtrusive.

In connection with the recent purchase of land for anew church at Saltburn, he has contributed a handsome sum. As Chairman of the big Public Meeting at the last District Synod he dropped a cheque into the collecting-box that greatly surprised but greatly cheered the collectors.

His home has long been one of the most hospitable in the Connexion, ever open to Primitive Methodist ministers and workers.

His sympathy with the sick and aged is of a most practical kind, and nothing could be more fitting than that he should occupy, as he does, the office of Guardian of the Poor.

With him
“ All joys are less,
Than the one joy of doing kindnesses.”

Many a young man’s life has been brightened by his kindly help and wise guidance. His loyalty to the Connexion and its institutions has always been very pronounced.

Three of his sons have been educated at Elmfield College, the eldest, a London University B.A., being, for a while, one of its assistant masters.

As chairman of public meetings his services have always been eagerly sought, and have been freely given, not only in his own, but in adjoining Circuits.

His worth and work have long been recognized, and such honours as his Circuit and his District have to give, have been conferred upon him.

He has also been twice a delegate to the Conference.

In official matters he “wears his heart on his sleeve,” is always sagacious and conscientious, and obviously free from anything bearing the taint of a selfish diplomacy.

In politics he is a strong Liberal. He is also an ardent Temperance reformer and a non-smoker, the influence of his non-smoking being seen in the fact that all his four sons are non-smokers.

He sets an excellent example to our well-to-do laymen in taking every magazine published by our Book Room.

In both his marriages he has been singularly happy, being blest in each case with a lady who has sympathized with him in all his aims, and contributed with unfailing wifely devotion to his best and highest interests.

God has blest him in “ basket and in store,” but his interest remains unabated in the spread and establishment of the Kingdom of Christ among men.

P.S. – Since the above article was written our dear friend has ascended to his Father in heaven.

One of his last acts was to give a cheque for £600 to the contemplated new church in Saltburn, in addition to a previous subscription of £200 towards the purchase of the site.

Michael was born at Ingleton, Co. Durham, to parents James and Margaret. James was a sadler, but also at times was a publican and grocer to supplement his income.

Michael worked as a butcher.

Michael married Jane Burdy (b abt1856) on 26 May 1885 at Ingleton, Co. Curham. Census returns identify three of four children.

Michael died on 8 October 1905 at Saltburn by the Sea, Yorkshire.