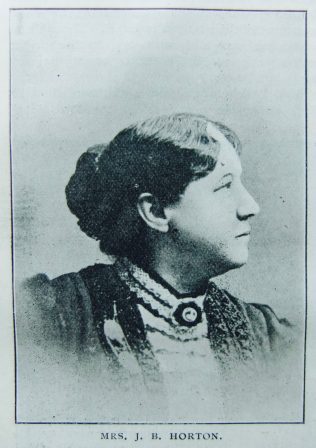 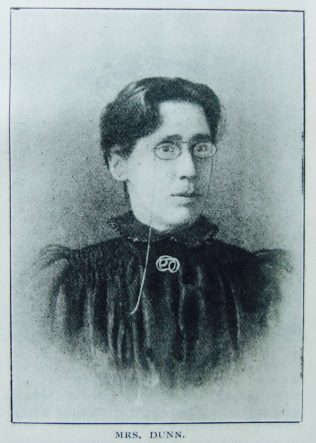 Transcription of Sketch in the Christian Messenger by R.R.C.

Besides filling the role of a popular writer, Mrs. J.B. [sic] Horton is serving our Church as a devoted and successful evangelist, for which office she is admirably fitted, both by nature and grace. Her arduous labours in this latter direction up and down the country have been crowned under the Divine blessing and the hearty co-operation of the officials and members with the conversion of a great number of persons of all ages. This is the pleasing and satisfactory testimony of many ministers under whose direction her mission services have been held. She is old-fashioned in theology, and delivers her message with no uncertain sound, but emphasizes strongly the doctrines of repentance towards God and faith in our Lord Jesus Christ. She is a member of our Harrow Road Church in the Marylebone Circuit, of which the Rev. R.R. Connell is the Superintendent Minister. She is a born Methodist. Her highly-esteemed father was at Wesleyan local preacher for over fifty years, whilst her mother was the daughter of one of John Wesley’s co-workers.

She, was converted in a village chapel at the age of 18, and has always displayed a deep interest in village church work, in which she finds special delight. Our sister is no stranger to the trials and sorrows incident to this life, which happily in her case have been sanctified to the consecration of her popular gifts upon the altar of enthusiastic, Christ-like service for the salvation of precious souls. Her husband was a medical man, who, with her only child, a little boy, she lost by death in less than eighteen months after marriage. It was after these painful bereavements that she resolved to give herself fully to public work, and along with Miss M. Parker (now Mrs. Dunn) as a colleague, has for over twenty years laboured in this work, in which she is still as zealously engaged as ever. Though most at home in Methodist Churches, she frequently takes a prominent part in the special services of all other denominations. We are pleased to learn that she has engaged to write the serial for the Christian Messenger for 1903, entitled “A Plot that Failed.” She has a facile pen, and is well and widely known as a most interesting and fascinating writer, always aiming at the moral and spiritual benefit of her readers as in her preaching to her hearers.

Josephine Padman Bellamy was born in the summer of 1853 at Burton on Trent, Staffordshire, to parents Robert Rayner Bellamy and Selina Padman.

Robert was a printer and publisher (1861) and also a Wesleyan Local Preacher. He was very much against the notion of women preachers and Josephine’s determination to become a preacher caused a family rift. He was also unhappy about Josephine turning her hand to writing fiction.

Census returns give the following occupations for Josephine.

Josephine married Edward Horton on 24 April 1878 at St Paul, Fazeley, Staffordshire. Edward and their son died within two years of the marriage.

The attached sketch from the Primitive Methodist Magazine provides more information about her life.