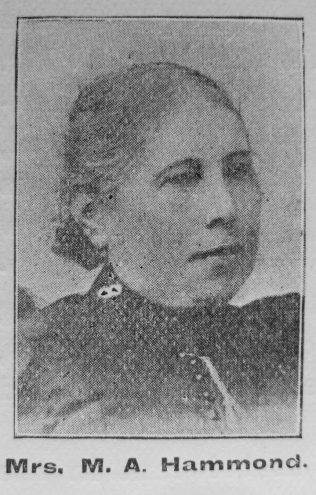 Transcription of Obituary in the Primitive Methodist Magazine by W.T. Cole

The removal of Mrs. M.A. Hammond has left a large gap in the Hebden Church, Grassington Circuit – a gap that only with great difficulty will be filled. She was born at Low Wood, near Pateley Bridge, in 1844. The district is charming in scenery; and it was no doubt partly due to the beautiful surroundings, amid which her early life was passed, that she had so much sympathy with nature. Her parents were farming people, and both were members of the Wesleyan Church. In 1860 she removed with her parents to Holesbeck, near Hebden; and it was only at this latter place that she resided from the time of her marriage – which took place a few years later – until she entered upon her heavenly inheritance. At first, however, she attended the Wesleyan Church in the village, and it was not until after her marriage that she accompanied her husband to ours. At this time she was not a member of society, only a regular attendant of the services and a Sunday School teacher. A few years after this her husband was awakened to his need of salvation, and after much painful seeking found peace through faith in the Lord Jesus. This had considerable influence over her; and shortly afterwards, at a prayer meeting at the close of a Sunday evening service, she made an open avowal of attachment to the Master. Undoubtedly this was a point to which she had been tending for a long time, it marked the end of a process. For, even before this time, her conduct was to all appearances such as became a Christian. Her home was a home for preachers, ministerial and lay; none who ever officiated at our little Bethel were unwelcome. Her husband, a local preacher, received from her every encouragement and help in his labour for God. During the whole of her connection with the church she took a great interest in the young people. She attended the Sunday School, and when it was not necessary for her to teach the scholars she was generally among them, guiding them by kindly counsels into good behaviour. And outside of the Sunday School she was equally interested in them. She would point them to lofty ideals, urge them to attempt something in life and help them along. Not a few gladly acknowledge their debt to her for help in their youth. But her beneficent ministry extended beyond the comparatively narrow limits of our little church; it was spread throughout the village. She was a friend of all the people, thoughtful of them in their sickness. Her removal has not only been a keen bereavement to her husband and relatives, and our society, but also to the entire village. It is by such characters as her’s that our villages are trained to higher ideals of life.

The end came suddenly and unexpectedly on April 24th, 1902, in her 58th year. Characteristically enough, she was visiting a sick relative in the village when she was seized with severe pains. Returning home, she was got to bed. In twenty-four hours she had passed to her reward. It was not expected that the illness would terminate fatally, but such was the case. The whole of the people were surprised and grieved.

The interment took place on April 28th. Laymen came from many of the surrounding circuits and took part in the sad service that was held in the church for which she had laboured so long. The former minister of the circuit, Rev. J.H. Hindle, and the Wesleyan minister also took part. The Rector of the parish showed his sympathy by conducting the service in his church, though in all respects the funeral was Nonconformist. The circuit minister officiated at the graveside.

So passed from among us a true Christian – humble, sincere, reverent. Our loss is great, but the Father knows best what to do. We “shall be satisfied when we awake in His likeness.”

Mary was born at Low Wood, Yorkshire, to parents Bayne, a farmer, and Elizabeth.

Thomas was a grocer, draper and general dealer.