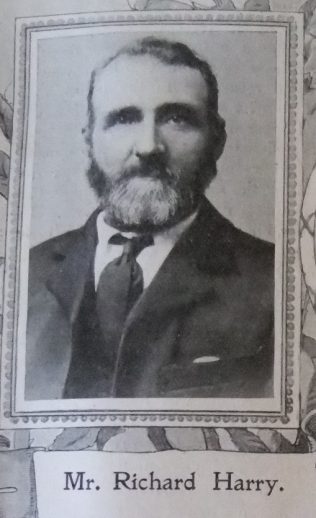 Mr. Richard Harry, formerly junior and now senior Steward of St Ives, Cornwall, was long the assistant, and now for years has been the principal leader of one of our strongest classes. He is the trustee’s secretary. Now fifty-two years of age his heart has always been on the Lord’s side, but when eight years of age great spiritual blessing came to him, and that is the only “conversion” of which he can speak. In his youth he accompanied local preachers to their appointments; then was one of a Mission Band which has rendered great service to the circuit. He is a nephew of the late famous “Capt. Dick Harry” whose face – a study in devotion – is the most striking feature in Mr. Titcomb’s painting “The Primitive Methodist Prayer Meeting,” a masterpiece that made the artist famous and immortalised our Chapel and prayer meeting attendants. A coloured facsimile is in Cassell’s “Nations Pictures,” part twenty-six.

I have not been able to definitively identify Richard Harry from census returns and birth records. It would be helpful if someone could point me in the right direction.

It is likely that he was a fisherman.