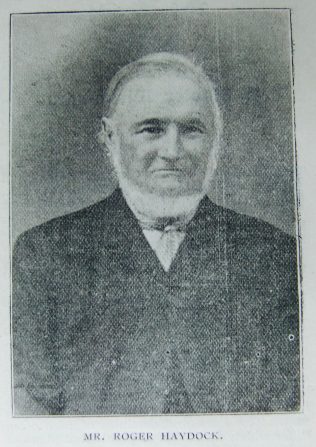 Transcription of Sketch in the Christian Messenger by Rev. E. Mather

Bulwer Lytton has said the World knows nothing of its greatest men, and it is certain the Church knows little of some of its highest examples of piety, influence and usefulness. This is true of the subject of this sketch. He is little known in the Connexion, but his life and character have been potent factors in Primitive Methodism throughout all North East Lancashire. And in Blackburn where he lives people look on him with veneration and esteem him as its grand old man.

Roger Haydock was born at Clayton-le-Dale near Blackburn, on December 26th, 1809, the same year in which Mr. W.E. Gladstone was born; he is in his ninety-second year, has lived under five English sovereigns, he is still hale and hearty, attends chapel – often three services, leads a class, takes a deep interest in the welfare of the Church. His parents were people in humble circumstances, his father was choir-master of the village church. Like many young people Roger fancied pleasure was to be found only in sin, so he was frequently found in the public-house singing, fiddling, dancing and drinking, but he confesses these left him with an aching head, a sad heart and a troubled conscience. He married on his twenty-fourth birthday and continued his evil course until he was about thirty years of age. He was working as a quarry-man when a work-fellow invited him to go and hear a lady preach at the Primitive Methodist Chapel; this lady was a Mrs. Pickles, the wife of a local draper. The word took hold of his conscience, he sought and found pardon and went away rejoicing, all the while repeating, ‘these Methodists know the way, these Methodists know the way.’ He joined our Church and sought to be of service, but at this time he could not read, but with the help of a devoted wife he soon learned to read the New Testament and the hymn book, and with these and a godly zeal he soon became useful. The teetotal movement which was just then beginning to spread under the influence of joseph Livesey, Thomas Whittaker and others, found a devoted helper in Roger Haydock, in which cause he walked hundreds of miles, speaking several nights a week and induced many young people to sign the pledge. Many who stand high in the social and religious life of Blackburn and adjoining villages are the fruits of his labours. It was not long before he was made a teacher, a local preacher, class-leader, and the superintendent of the Sunday school, a position which he occupied for thirty years, and was never absent except when on duty and was never known to be five minutes late. Our friend was very poor when converted, and desiring to help at the school anniversary, he gave up smoking, saved half a sovereign and the first piece of gold he ever possessed he gave to God’s cause. Since then, he tells us, he has never been without gold both for his own use and to help the cause. As a local preacher Mr. Haydock was very popular, his native Doric, his telling illustrations, his quaint humour, his ready wit and a fervour and earnestness that swept all before it, made him one of the most popular preachers for miles around. Only a few months ago he  addressed nearly 1,000 people at a P.S.A., and recently gave an address at the Bible Society meeting in the Blackburn Town Hall.

But Mr. Haydock’s chief work was done in connection with the Bible Society. About forty years ago he was engaged as a Colporteur at £I per week and continued at this work for over thirty years. He began by going from house to house, then into the mills and workshops, extending his sphere to the markets, fairs and even races in the adjacent towns and villages, until he compassed a radius of about fifty miles. During those years he walked thousands of miles and sold upwards of 100,000 Bibles. Few men have had more opportunities of doing good than he had during all those years and few made more use of them. In the cottages of the poor, in mills, at fairs, in the houses of the rich, his topics were the preciousness of the work, the blessings of salvation and the love of God through Jesus Christ. In one mill alone, mostly to Roman Catholics, he sold 200 bibles, such was the esteem in which he was held. He was often assailed by sceptics and secularists, but he was seldom put to confusion, but often planted the truth which bore good fruit. Once a Romish priest in a farm-house denied what he said about the knowledge of salvation, but relying on his own experience he said he knew he was saved and his sins forgiven. ‘Then you are a saint,’ said the priest. ‘Well,’ said the other, ‘if being forgiven makes one a saint then I must be one.’ ‘But,’ retorted the priest, ‘saints are only in heaven.’ ‘ Well,’ replied the man of the Book, ‘but there are only two sorts, saints and sinners, and if saints are made out of sinners they must be made so on earth before they go to heaven, for there are no sinners there.’

The zeal of this man is seen in this one fact. It had been the custom for years in his early days for men to go to the outskirts of the town to a certain place and to fight with bulldogs or wages. After thinking over this subject and making it a matter of prayer he went one Sunday morning just as they were about to begin, he spoke to them, warned them, expostulated with them, when several of the most brutal and demoralised, seeing that their sport was going to be interfered with, set their bull-dogs at him, but strange to say the dogs refused to bite him, others were won by his gentleness and courage, and from that day the cruel sports were stopped. Calling at a house selling his Bibles some time after, a rough man was heard to exclaim, ‘see, wife, that is the man the dogs refused to bite.’

At his native village there was a race-course where horse-racing took place several times a year. The drinking, the gambling, and other evils that attend such places caused our friend great concern. He made this a matter of prayer and shortly afterwards agreed with several other godly people to hold an open-air service and prayer meeting on the race-course. Their object was to pray for the salvation of souls and that the races might cease. They held their service, they sung and prayed and preached. When the horses were running they knelt down to pray; as they prayed in a circle they could hear the horses galloping past. On the race-ground several people were converted, one or two who are still living and active workers in the Church, and what is wonderful to relate is, that in a few months the races were abolished and on that race-ground a new church was built, and on the spot where the prayer meeting was held the chancel of the church now stands. O mighty power of prevailing prayer! Our friend is still with us, happy and honoured by God and his fellow-men. Still devoted to his Master, still interested in the Bible Society, for which he collects about £20 a year towards its funds, four generations of his family are connected with our Church and many more of his family await him in the Church triumphant above.

Roger was baptised on 7 January 1810 at St Peter, Salesbury, where his father was the singing master. His parents were George, a farmer and handloom weaver, and Ellen.

Roger died on 22 March 1904 at Blackburn, Lancashire. A stained glass window to his memory was erected in the Primitive Methodist Church, Montague Street.

A book was written about him in 1912 , by the Rev. John Whittle.”Owd Roger”:Bible Colporteur and Primitive Methodist Lay Preacher. The story of a Bible-Inspired Life.