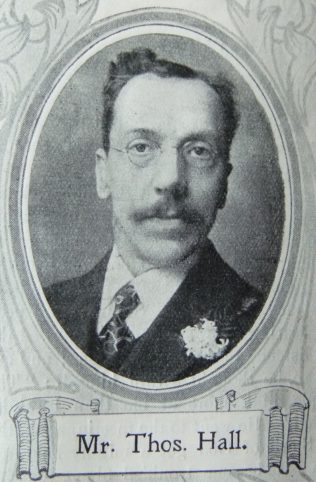 Mr. Thomas Hall is the eldest son of the late John Hall a deed poll member of Conference, so long and intimately associated with the Windhill Society of the Shipley Circuit. We are glad that the family continue to take the liveliest interest in the welfare of that Society.

Mr. Thomas Hall is at the forefront of the work at Windhill, as well as serving the circuit as Senior Steward, which office he has held for fifteen years. Like his father he esteems the ministry of his church, and is ever ready to honour and encourage the servants of Christ.

He is careful, methodical, and accurate in his methods; genial and brotherly in his fellowships; strong yet equable in his temperament. In business meetings his influence is gracious, albeit quietly exercised. One of the quiet workers, who makes little fuss, but who are a tower of strength, is Mr. Hall.

Thomas was born on 28 March 1860 at Windhill, nr Bradford, to parents John and Eliza. John was a tea dealer and draper. Thomas was baptised on 17 June 1860 by Rev John Maylard.

Thomas worked in several management positions including within a coal merchants, a wholesale druggist business and as a sales manager and director for a sauce manufacturing company.

Thomas married Eliza Moore (b abt1855) in the spring of 1881 in the Wharfedale Registration District. Census returns identify four children.