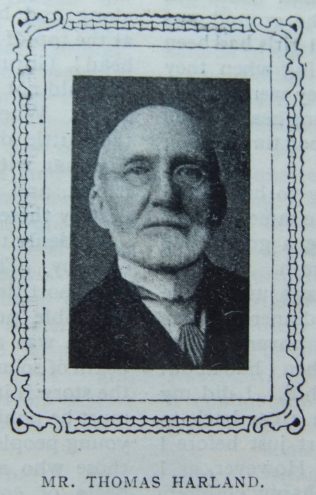 MR. THOS. HARLAND, of Snainton, Scarborough First Station, is one of those men who have made village Primitive Methodism. He is a natural and inevitable leader in village life, and his gifts and graces would have placed him in the front rank in any town or city life. He had a godly parentage, and on both sides rejoiced in a fine Methodist ancestry. Amongst his forbears was the Rev. W. Harland, a noted early minister of our church, and his mother belonged to a Wesleyan family which included the Rev. P. Featherstone.

Mr. Harland was born at Ebberston on June 11th, 1837, and when eighteen years of age yielded to the gracious influence of his early training, and consecrated his life to the service of Jesus Christ. Thus commenced a career of active and devoted labour that has been eminently profitable to our church. He was one of the founders of our Snainton Sunday School over fifty years ago and has continued in active work as teacher or superintendent to this day.

About the same time as Sunday school work was begun, Mr. Harland was engaged in pioneer Temperance and Band of Hope work. There was much opposition and many difficulties. Not even the Primitive Methodist premises were available, and the meetings were held at first in cottages or unused workshops; but the work continues and prospers.

For forty-one years Mr. Harland has been leader of a society class. Large numbers both of children and adults have passed under his influence.

Mr. Harland has also served as society steward for thirty-one years, and holds the treasurer ship of the Trust Fund.

Thomas was born to parents William and Jane. William was a farmer.

Thomas was a master tailor and draper.